In May, a collaborative team from the South African Weather Service and the University of Las Palmas de Gran Canaria deployed two floats managed by Euro-Argo ERIC in the Agulhas Current to track eddies.

From May to August 2022, the South African Weather Service team, led by Tamaryn Morris, in collaboration with Drs Borja Aguiar González, Francisco Machín and Ángel Rodríguez Santana from the Universidad de Las Palmas de Gran Canaria, Canary Islands, conducted an eddy experiment deploying two Core Argo floats into a cyclonic eddy southwest of Madagascar. The floats were programmed to drift at non-standard depths of 650 m and 800 m and with short cycles of daily, 2-daily and 5-daily depending on the proximity of the eddy to the Agulhas Current (AC).

This eddy experiment has captured once again, similar to the one performed in 2013 (Morris et al. 2019), the full eastward travel and later collision of the eddy with the southward-flowing AC (see Figure 1 below), showing that the approach to tackle the lagrangian evolution of eddies is a success and can be applied elsewhere in the world's oceans.

One of the floats – the one parked at deeper levels – left the eddy during the mature stage of the eddy. This supports former modeling results suggesting that the eddy vertical structure shrinks (i. e. the depth-reaching impact becomes shallower) as it approaches its decay stage with potential implications to the volume transport capacity of these features. 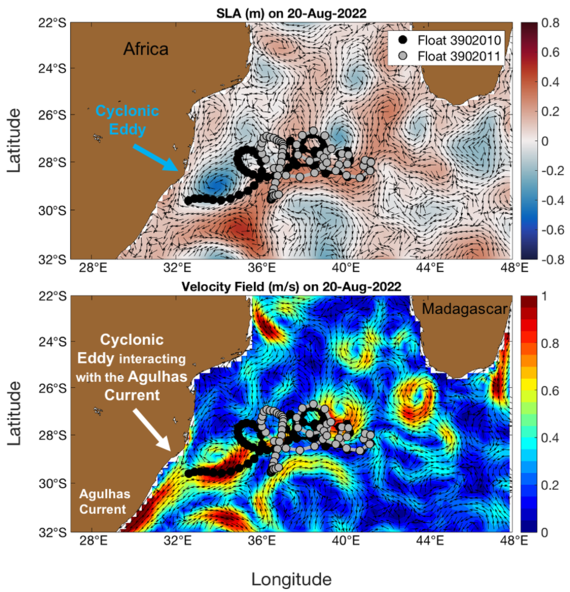 Figure 1. (a) Sea Level Anomaly (SLA) overlying the vector velocity field to highlight the location of the cyclonic eddy under study. This is shown as a clockwise rotating feature with negative values of SLA (blue shades). (b) Vector velocity field and magnitude (shades of colors) to highlight the interaction of the Madagascar cyclonic eddy with the Agulhas Current. The retention of the Argo floats within the eddy is evident following the sequential loops. The float in black (parked at 650 m) stayed inside the eddy upon collision with the Agulhas Current, while the float in gray (parked at 800 m) abandoned the eddy before the collision. This pattern helps us to better understand the retention capacity of eddies as they evolve through their life stages, shrinking vertically as they approach their decay phase.

Results from this experiment, combined with those performed in 2013, will add a better understanding of the spatio-temporal changes experienced by cyclonic eddies along their travel from Madagascar to the AC.

Importantly, the time-resolution of the measurements collected by these floats will allow researchers to assess mixing occurring within the eddy as it travels and evolves through different life stages, as well as the heat/salt contribution of this eddy to the AC. Assuming the two cyclonic eddies of study (experiments in 2013 and 2022) behave as prototypical Madagascar cyclonic eddies, these results have the potential to be applied to some extent to a historical census of Madagascar cyclonic eddies, thus bringing to the fore a greater perspective for eddy contributions to western boundary current systems.