After having created our infrastructure, recognized as ERIC since 2014, and having managed the team and consequently coordinated the whole European contribution to Argo program with brio since then, Sylvie Pouliquen is about to retire. This demanding position is now being taken over by Yann-Hervé De Roeck.

Trained to become an expert in high performance computing for mechanical and physical modelling, his education began with three complimentary degrees, a graduate engineer from the Ecole Polytechnique , then a civil engineer at Ecole Nationale des Ponts et Chaussées and a doctorate in numerical analysis from the Université Paris-Dauphine.

Yann-Hervé joined Ifremer  as a research engineer, bringing his skills in modelling non-linear behaviours in various fields, ranging from composite materials for oceanographic applications to geophysics at the geotechnical scale, and also data assimilation in coastal operational oceanography.  As team leader, he then set up a department devoted to the dynamics of the coastal ecosystems, including at that time an innovative operational forecasting system, Previmer, combining processes – hydrodynamical, sedimentary and biological at the primary production level. Twelve years ago, a turning point in his career led him to create the public-private institute France Energies Marines, which supports R&D in the soaring sector of offshore marine renewable energy. The strong team of 60 researchers and engineers that he has assembled will now pass into new hands.

Indeed, at the time of a striking evidence of the need for a steady in situ monitoring of the ocean, on both its physical and biogeochemical properties and in its open-sea, polar and coastal dimensions, Yann-Hervé De Roeck is taking up the challenge of the sustainability and expansion of Euro-Argo ERIC. With this in mind, he will oversee all ERIC activities, from managing the ERIC office team based in Brest, France, to coordinating with the twelve European ERIC members. 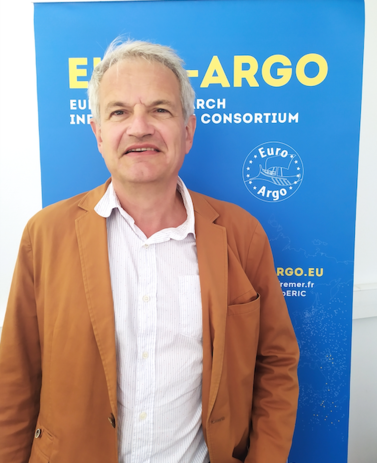