The Euro-Argo regional workshops were held virtually on April 8th– 9th 2021, organised in the frame of the H2020 Euro-Argo RISE project. It gathered more than a hundred people for the General session, coming from 23 different countries. For the first time, this event allowed to connect scientists sharing interest for these very specific regions.

During this online event, 2 workshops (Mediterranean and Black Seas / Arctic and Baltic Seas) were merged with a first common session on “Argo in the European Marginal Seas” and three thematic regional sessions. 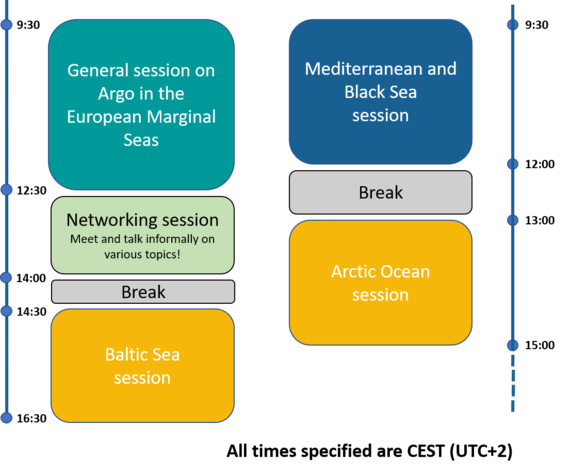 This event was dedicated to the regional communities in the European Marginal Seas, with the following main target audiences: scientists, operators and any stakeholders interested in the key role of Argo in the Mediterranean, Black and Baltic Seas as well as the Arctic Ocean.

The main objectives of this workshop were first to present the technical aspects of Argo and the scientific usage of Argo data in these areas and then to develop new regional collaborations and engage with new teams from various countries.

It has been a successful event that allowed to set up the basis for new collaborations to extend Argo interest into regional spheres and to consolidate a network of scientists engaged in climate and ocean research using Argo data.

These workshops were organised within WP5 ‘Extension to high latitude regions’ and WP6 ‘Extension to Marginal Seas’ of the Euro-Argo RISE project that received funding from the European Union’s Horizon 2020 research and innovation programme under grant agreement n°824131.