In the Argo program framework, a Deep-Arvor was successfully released in June 2016 in the western Cretan passage, a very deep area in the Mediterranean Sea with depths exceeding 4000 dbar. The float carried out 11 cycles from deployment, providing high resolution vertical profiles of temperature (T), salinity (S) and dissolved-oxygen (DO2). No signal has been received from the float since 03 August 2016, and it is now considered as lost. A new Deep-Arvor float is planned to be deployed during next autumn 2016 in the same area.

The 8th of June 2016, the deployment of one Deep-Arvor float (WMO #6903200) has been carried out from HCMR’s R/V AEGAEO during the CRELEV 2016/EUROFLEETS2 cruise, thanks to a collaboration between  OGS and HCMR (figure 1). 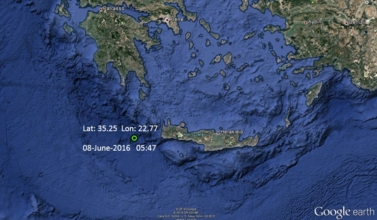 The Deep-Arvor float is a particular version of the NKE Arvor subsurface profiling float, manufactured jointly with Ifremer. Temperature and conductivity are measured by a SBE 41-CP ALACE probe, and dissolved oxygen is measured thanks to and AANDERAA 4330 optical oxygen sensor. The float uses Iridium telemetry to communicate and to send its data.

Initially, the float was programmed to cycle every 2 days in order to have more frequent transmissions, than it was changed to 5 and finally to 10 days (table 2). The float was configured to park and to profile at 4000 bar in order to try to maintain the float in the deep area, avoiding it to escape with the currents. 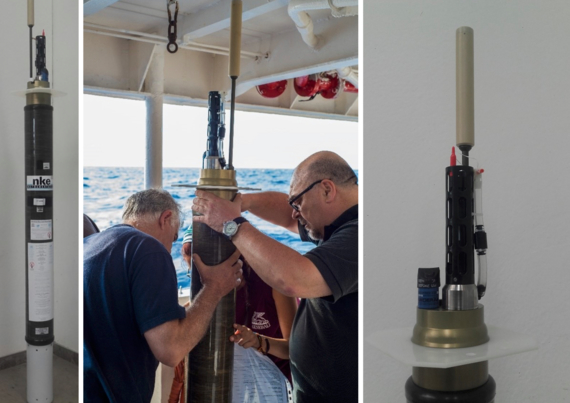 Nearby the deployment point (about 2.3 km), the S23 station was sampled by CTD rosette. Potential temperature, salinity and dissolved oxygen are compared in figure 3. Float to CTD data comparison in the deployment area shows : 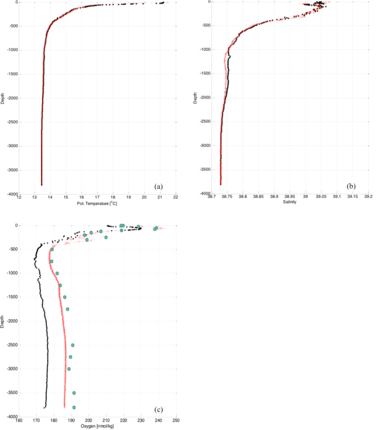 The Deep-Arvor was programmed to sample the water column only during ascending phase, the initial cycling period changes are summarized in table 2 while the points of emersion with relative transmission dates in the Cretan western passage are shown until the 14 July in figure 4.

The achieved temperature (in situ and computed potential temperature), salinity and dissolved oxygen high resolution vertical profiles are shown in figure 5 for the first 8 cycles (until 14 July 2016). Note data of good quality and a great homogeneity between the profiles.

Figure 6 completes this view by representing the temperature, salinity and oxygen scatter plots relative to each cycle from the deployment date to 14 July 2016. The estimated local bathymetry is shown with black dotted line, the interpolation is based on the ETOPO1 database, one arc-minute resolution Global Relief Model (Amante, C. and B.W. Eakins, 2009). Upper in the graphs, the intermediate distances are reported in kilometers, while grounding information is shown with red bottom square (if present, the float touched the sea floor). The float touched the bottom at every cycle and its internal vacuum and battery voltage remained within acceptable limits. 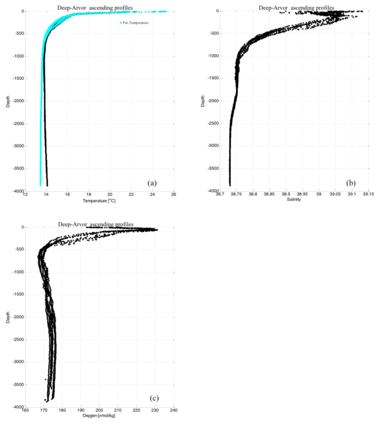 Figure 5 : Vertical profiles of (a) in situ and potential temperature, (b) salinity and (c) dissolved oxygen sampled by the Deep-Arvor 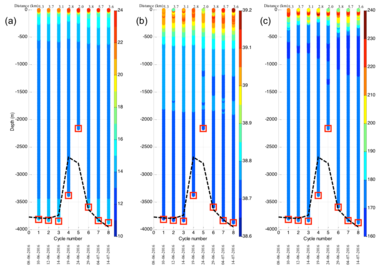 Figure 6 : Deep-Arvor measurements versus cycle number for (a) temperature, (b) salinity and (c) dissolved oxygen