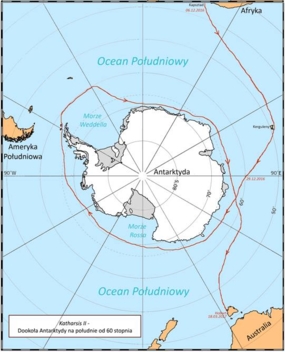 A sailing expedition, consisting in a voyage of approximately 100 days through some of the world’s most difficult seas and oceans – including the circumnavigation of Antarctica, the coldest and least accessible continent on our planet started from Cape Town, South Africa, on 23 December 2017. Mariusz Koper and his entirely Polish crew are planning to be the first to completely circumnavigate Antarctica south of the 60th parallel.

Sports aspirations apart, the crew of Katharsis II have ambitions to generate new knowledge of the Austral Ocean’s matchless environment. The Katharsis II voyage around the Antarctic offers a unique opportunity for scientific research activities, that will be conducted in co-operation with the Institute of Oceanology of the Polish Academy of Sciences (IOPAN, Euro-Argo partner), represented aboard by Polish Academy of Sciences professor Piotr Kukliński (more information here).

In that context, 3 MOCCA Argo floats were deployed last week from the Katharsis II close to 60°S, thus enhancing the global network in a region of poor coverage, where deployments are rare.