E-AIMS is a EU FP7 funded project that started on 1 January 2013 and ended on 31 December 2015. It was coordinated by Ifremer and involved 15 partners from 9 European countries and was granted 2M€.

The Copernicus Marine Environment Monitoring Service (CMEMS, formerly GMES) is the pan-European service for ocean monitoring and forecasting over the global ocean and European seas. In situ and satellite observations are routinely assimilated in ocean models to provide integrated descriptions and short-term forecasts of the ocean physical and biogeochemical state in real time or in delayed mode. These core products serve a wide range of applications and users. The delivery of the Copernicus Marine Environment Monitoring Service strongly relies on the timely provision of both satellite and in situ observations. While satellites provide a global view of the surface of the oceans, in situ systems provide complementary data primarily by monitoring their interior. The Copernicus Marine Service has thus a very high dependency on in situ observations. 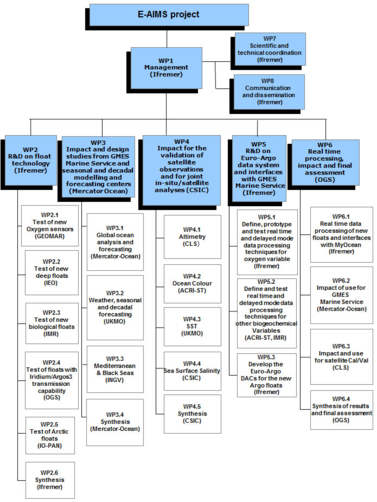 The international Argo programme is a major element of the global in situ ocean observing system, and Argo is the most important in situ data provider for the Copernicus Marine Service.

In this context, the main objective of E-AIMS was to conduct R&D activities on Argo float technology, Argo data centres and the design of the new phase of Argo (extension of the network towards biogeochemistry (e.g. oxygen, biology), the polar oceans, the marginal seas and the deep ocean) to better answer existing and future needs of the Copernicus Marine Service.

The project was organized along the work packages described in the figure below.

E-AIMS organized an end-to-end evaluation of new Argo floats. Float characteristics were specified and float design or sensor adaptation activities were carried out. These new floats were ordered to float manufacturers, tested, deployed at sea and a detailed analysis of their data was carried out. European Argo data centres were, in parallel, adapted so that they can handle them (data processing, quality control, data distribution). Observing System Evaluations and Simulation Experiments were also conducted to provide robust recommendations for the next phase of Argo. A real time demonstration of the utility of these new floats for the Copernicus Marine Service was finally successfully carried out.

E-AIMS thus demonstrated the capability of the Euro-Argo infrastructure to conduct R&D driven by Copernicus needs and demonstrated that procurement, deployment and processing of these new floats for Copernicus can be organized at European level. Impact on the Copernicus Marine Service was clearly evidenced. Both feasibility and utility aspects have thus been fully assessed. At the end of E-AIMS, the Euro-Argo ERIC was thus in an excellent position to agree on and start implementing the new phase of Argo that will be highly beneficial to the Copernicus Marine Service.

E-AIMS designed, deployed and evaluated floats which are required for the evolution and future goals of Copernicus Marine Environment Monitoring Service (CMEMS), including new ocean variables, as well as increased accuracy, reliability and cost-effectiveness. The main impact of the E-AIMS work was on the development of enhanced Copernicus Marine Environment Monitoring Service (CMEMS), and hence on better products, information and services available for the downstream activities, including scientific use of its data sets. The involvement of the Copenicus Marine Service global and regional monitoring and forecasting centres ensured a full integration of the project R&D results into the operational systems. The real-time assessment included a full-scale, end-to-end evaluation of this capability. The development of the use of Argo floats to calibrate/validate and complement satellite observations (sea-level, sea-surface temperature, salinity, ocean colour) also allowed us to improve the accuracy of satellite measurements, to quantify their uncertainties and to make a better use of satellite observations.

The R&D and tests on Argo floats (the diversity of sensors to be adapted to the instruments, the new communication capability, and the performance in deep and ice-covered seas) also had a positive impact on the research and development and commercial activities of the European companies manufacturing the instruments (the SMEs NKE in France and Optimare in Germany). The partners also worked in close interaction with these two float manufacturers. New floats or prototypes were specified or pre-designed and ordered to them. They were then fully tested and feedbacks were given to float manufacturers. This will allow them to improve and develop their float product lines.

E-AIMS was elaborated to fulfil the requirements and priorities of monitoring programmes designed to support decision making in several key societal benefit areas (as identified, e.g. by GEOSS). Given the prominent role of Argo for climate change research, its contribution to, and impact for seasonal and decadal climate forecasting, socio-economic impacts of the E-AIMS activities are expected to be large on the longer run. Socio-economic impacts from Argo also include those to be handled through the Copernicus Marine Service (e.g. maritime transport, marine safety, fishery management, oil pollution monitoring and forecasting, and offshore industry). Investing in such global ocean observations has thus potentially a high benefits /costs ratio.

Impacts on the Euro-Argo Research Infrastructure

E-AIMS has worked in close cooperation with the Euro-Argo ERIC European legal entity that federates and organizes European activities contributing to the Argo international programme.  This will ensure that E-AIMS project results and findings can be optimally exploited after the end of the project.

E-AIMS demonstrated the capability of the Euro-Argo infrastructure to conduct R&D driven by Copernicus needs and demonstrated that procurement, deployment and processing of these new floats for Copernicus can be organized at European level. Impact on the Copernicus Marine Service was clearly evidenced. Both feasibility and utility aspects have thus been fully assessed.  The Euro-Argo ERIC is thus now in excellent position to capitalize on these results and prepare the implementation of the next phase of Argo in Europe.  E-AIMS findings and recommendations have been included, in particular, in the “Strategy for evolution of Argo in Europe” roadmap prepared by the Euro-Argo ERIC to start implementing the new phase of Argo in Europe. 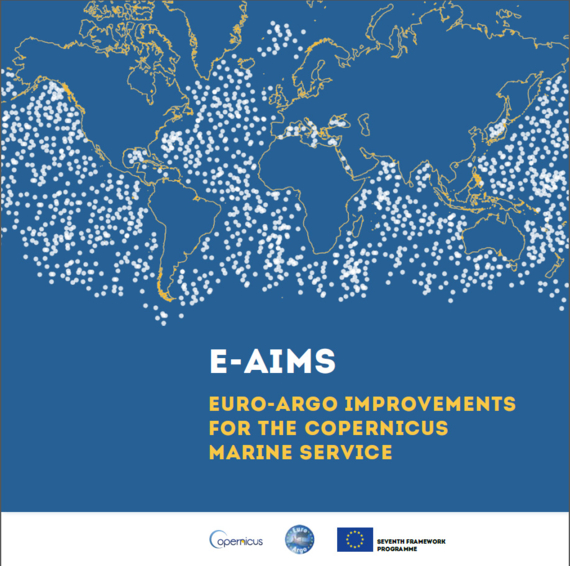