Argo floats are deployed by sailors or scientists during campaigns at sea in the whole Ocean.

Every dot on this map represents an Argo float operating on August 4th 2021. At this date, there were 3904 of them in the whole ocean.

Two float deployments from a research vessel on the left and from a light craft on the right.

After the deployment, the Argo float dives to the depth scientists chose to investigate, between 1000 m and 6000 m under the sea surface, in two steps: first, the float descends to a target depth of 1000m to drift, then it descends again to the final chosen depth. The Argo float measures the precious ocean water parameters* while going up till the surface. The full "cycle" is about ten days. After about 200 missions  – around 5 years –  the batteries are exhausted. With no energy to bring it to the surface, the float drifts and finally sinks to the sea floor, unless recovered. 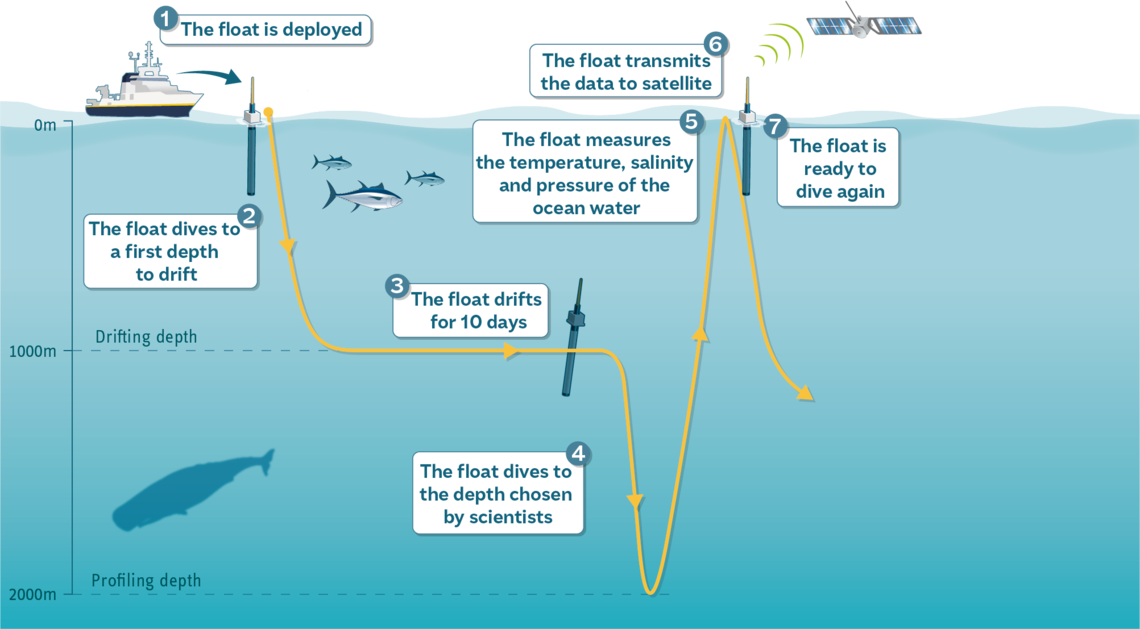 This is a full mission – also called a "cycle" – of an Argo float, from its deployment to the time when it transmits its measurements to the satellites.

To take measurements of the ocean water, Argo floats are equipped with sensors in the PVC tube just above their head. First, the ocean water goes through them and these sensors measure directly its temperature and pressure. Then the water is pumped and directed to another sensor cell where its conductivity – the ability of water to carry an electric current – is also measured. The salinity of the ocean water is finally deducted from this conductivity.

Here are the different parts of an Argo floats. A float is about 1.1 m tall and weighs around 25kg.

Throughout its ascent, the float records four pieces of observation in its memory: the depth at which it measures, the measured temperature, salinity and pressure. The result of these vertical surveys are called "profiles*".

Sometimes, scientists also want to learn more about the oceanic ecosystem* health so they add extra sensors to the float to gather other information.

When they eventually reach the surface, they send all the collected data to the scientists: thanks to the antenna on the top of their head, they transmit them to satellites. These data are free and open to everyone. Mission accomplished! Scientists can now analyze them, to predict climate change for instance.