A BRIEF HISTORY OF ARGO

In Greek mythology, Jason sailed the oceans on his ship, the Argo, in search of the treasure of the Golden Fleece.

In the 21st century a fleet of about 3000 modern-day 'Argos' is searching for an even more important treasure...

...an understanding of how the oceans affect our lives and particularly how they influence the Earth's climate!

Those modern 'Argos' are actually very clever and sophisticated robotic instruments. For reasons that will be explained we call them Argo float...

Until the middle of the 20th century, there was no method to measure currents below the surface of the open ocean.

The problem was solved in 1955 when a British oceanographer, John Swallow, developed what became known as the neutrally buoyant (or Swallow) float.

The Swallow float would stay at a fixed depth and move with the currents at that depth. The path taken by the float, and hence the current speed and direction, could be measured by scientists on a nearby ship listening to sounds ('pings') emitted at regular intervals from the float. Information from Swallow floats soon revealed that the deep oceans were not the tranquil regions predicted from theory. Instead they were filled with energetic currents that vary on scales of weeks and hundreds of kilometres, much as the atmosphere is filled with weather systems that change the speed and direction of the winds.

WHAT ARE ARGO FLOATS ?

Argo floats are drifting cylindrical containers with instruments to measure the properties of sea water.

The floats drift freely with the currents, measuring the temperature and salinity of the upper 2000 m of the ocean.

They make it possible to monitor the temperature, salinity, and current velocity of the upper ocean continuously and receive the data within hours. Some floats also make other measurements. 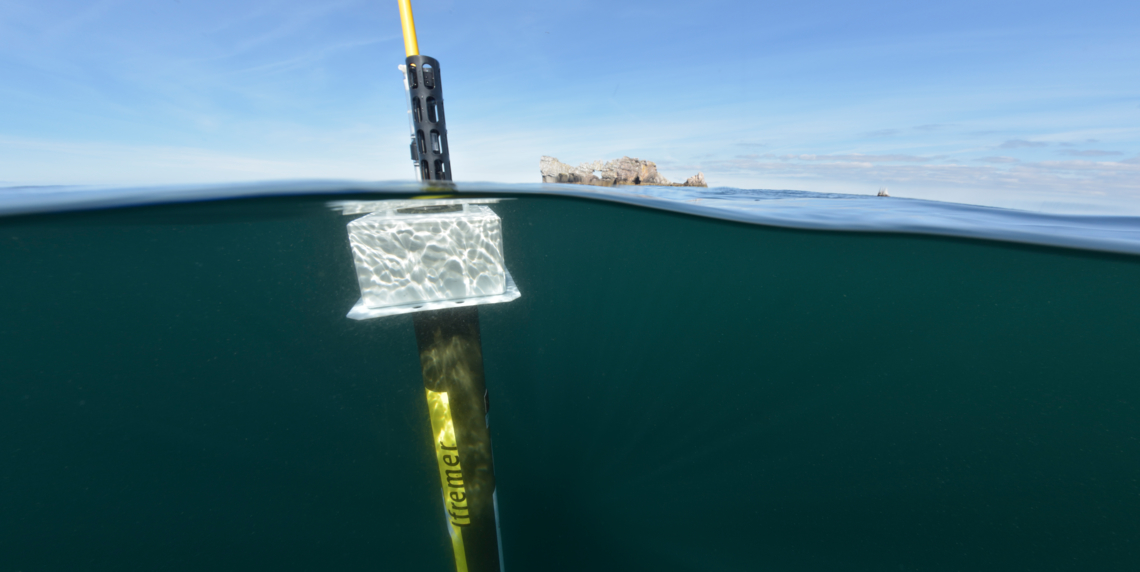 The body of an Argo float is made of aluminium tubing.It contains electronics, pumps and many batteries.

At the top are the sensors that measure temperature and salinity, and an antenna to transmit the data.

At the bottom is a rubber bladder, which controls the depth of the float.

Soon after a float is launched, it sinks to 1000m depth and then to 2000m, making measurements all the way.

After 10 days it returns to the surface and transmits its measurements back via satellites. The measurements are available to scientists - and to you - on the Internet.

>> More about how an Argo float works

More than 30 countries are directly involved in setting up the network. Since November 2007 there have been close to 4000 floats operating and delivering their measurements every 10 days.

The array is made up of 30 different countries' contributions that range from a single float, to the US contribution which is roughly 50% of the global array!

Each year, 800 to 900 new floats are deployed, the number needed to maintain a network of close to 4000 active floats given their average lifespan of 3-4 years. 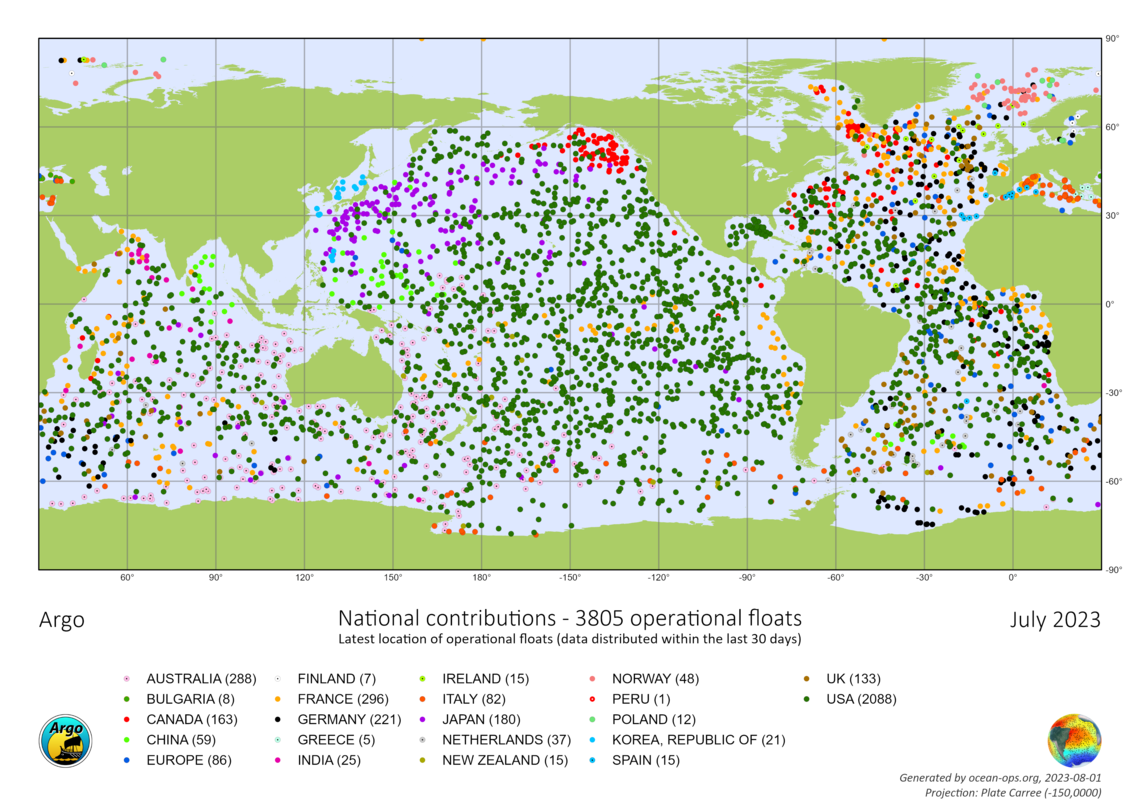 The national Argo programmes below are all members of Euro-Argo:

The Argo programme in France is undertaken by the Coriolis partnership between the seven French institutes involved in oceanography (CNES, CNRS, Ifremer, IPEV, IRD, Météo-France, Shom).

French Argo is active in the international Argo Steering Team and the Argo Data Management Team.

Since 2000, about 450 French floats have been deployed in a number of different geographic areas.

The interests of France are global but with special interests in the Atlantic, Indian and Southern Oceans

The UK's contribution to Argo is undertaken by a partnership involving the Met Office (which manages the project),

Since 2001, over 250 UK floats have been deployed in a range of geographic areas.

The BSH takes the overall lead to transform German Argo into an operational system while the KDM-partners are involved in new developments and scientific applications.

Since 2000, several hundred German floats have been deployed in different geographic areas, where deployments have focused on meeting the scientific interests of the German partner institutes.

German Argo interests are mainly in the Atlantic, bug contributes to the global array in the Nordic seas and the Southern, Indian, and Pacific Oceans.

The Dutch Argo programme is carried out by KNMI, the Dutch national weather service, as part of their climate monitoring activities.

Float deployment is coordinated with NIOZ, the Netherlands Institute for Sea Research.

Float deployment started in 2004 with 4 floats. Since then several other floats have been deployedwith a focus is on optimally filling gaps in the global array of Argo floats.

The Irish Argo programme is managed by the Marine Institute (MI).

The first four floats were deployed in spring 2008 in the Rockall Trough west of Ireland.

The MI runs the Rutgers Ocean Model (ROMS) on an operational basis.

Argo profiles will provide a near real time check on model output profiles of temperature and salinity. Ireland's interests are primarily in the North East Atlantic.

Med-Argo data are routinely assimilated on a weekly basis in one of the operational forecasting systems,

and are also used by a small group of researchers in Greece for studies of water mass characteristics of the Aegean Sea and the wider Mediterranean.

Bulgaria is newcomer to Argo, with two Bulgarian institutions take part in Euro-Argo: Physical Oceanography Group in the University of Sofia (USOF)

and Institute of Oceanology in the Bulgarian Academy of Science (IOBAS).

Bulgarian interests are mainly in monitoring the Black Sea and hope to use Argo data for assimilation into a Black Sea circulation model.

The Norwegian Argo programme is carried out by the Institute of Marine Research (IMR) as part of their environmental monitoring activities.

Float deployment started in 2002 and is often done in collaboration with the German Argo.

The Norwegian Argo programme focuses on the Nordic Seas for climate monitoring and research.

Ecosystem monitoring and research are also priorities, so some of the floats are also equipped with sensors for chlorophyll fluorescence and oxygen.

Institute of Oceanology Polish Academy of Sciences (IOPAS) is the polish ARGO project leader, and collaborate with the University of Gdansk.