WHAT HAPPENS TO THE ARGO DATA ?

Information from each float goes from the satellite to a receiving station and then to laboratories where the data are checked and turned into understandable numbers.

Within 24 hours the data are passed to operational weather forecasting centres where it is used in climate forecasting. Soon after this the data is also available to you on the Internet.

Later, scientists make detailed corrections to make sure the data are of the quality needed to measure the very small but important changes in temperature and salinity that might be due to climate change.

HOW TO INTERPRET ARGO PLOTS ?

Interpreting the profiles means thinking about the float trajectory, the climate of the region the float has passed through, and the currents that have moved the float from place to place. 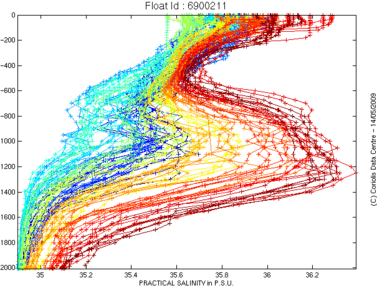 The temperature (T) and salinity (S) time series of data collected by a single float.

Each measurement cycle is represented by a very thin column coloured with dark red for the highest values and dark blue for the lowest values.

These are packed together along the x-axis, which represents time or cycle number. The colour bars relate the colours to actual data values.

Together temperature and salinity determine the density* of seawater.

When salinity increases, so does its density; when the water cools it becomes more dense.

If surface water cools sufficiently, it may be come dense enough to sink.

Similarly, when seawater freezes, the ice leaves behind a salty brine so dense that it sinks right to the deepest parts of the ocean.

When surface water has a similar density to deep water, it is easy for the two to mix.

Similarly, when surface water becomes denser than the water below, it sinks.

Together differences in temperature and salinity drive the vertical flow of ocean water known as the thermohaline circulation (THC).

HOW THE ARGO DATA ARE USED ?

Argo data is used in may different ways, by Met Offices, ocean forecasters, and research scientists all over the world.

Operational users collect the data from the Argo Data Centre in near real-time and use it forocean forecasts or seasonal weather forecasts.

Argo data for these users go through an automated quality check.

Seasonal weather forecasts are becoming more reliable, particularly in the tropics, and allow farmers to plan their crops.

For scientific use there is usually no such rush, but quality control is much more important, particularly where Argo data is used in climate change research.

Delayed mode Argo data therefore goes through an addition, more careful quality check, which involves scientists checking the profiles before the data is used to create climatologies or investigate climate change and variability.