In the frame of the Euro-Argo RISE project started in 2019, Ifremer and IEO/CSIC collaborates in order to contribute to expand, at the European level, the Argo network to the deep ocean. This work is also an opportunity to identify new sensors that meet the requirements of the deep ocean, to diversify them.

The crucial need for a Deep Argo Mission was endorsed by the Argo Steering Team as a part of OneArgo. However, the CTD sensors (SBE41s) used on most of the core Argo floats were not initially designed to go below 2000 m depth. To do so, Seabird strengthened its design with dedicated SBE41 capable to operate down to 4000 m depth. In addition,a new generation of sensors has been developed with the aim of being accurate down to 6000 m (SBE61, RBR concerto). For Deep Argo, the accuracy needed is ± .001C, ±.002 psu, and ± 3 dbar. But does the strengthened SBE41 give high quality data down to 4000m and can the RBR concerto be used in the frame of Deep Argo? European partners joined their effort to answer these two questions: the RDT unit of Ifremer developed Deep-Arvor profiling floats, IEO/CSIC and Ifremer deployed them during two oceanographic cruises, in 2020 and 2022, and Ifremer and IEO/CSIC analyzed the data quality together with RBR and Seabird.

To address Seabird and RBR sensors’ accuracy and stability, one 3-headed float and two two-headed floats were deployed in the Canary Basin during RaproCan cruise in March 2022. This cruise is part of the ocean observing strategy of the Spanish Oceanographic Institute. Since 1997, it allows to sample the Coastal Transition Zone of the Canary Current Eastern Boundary Upwelling system thanks to deep hydrographic sections with CTD casts. 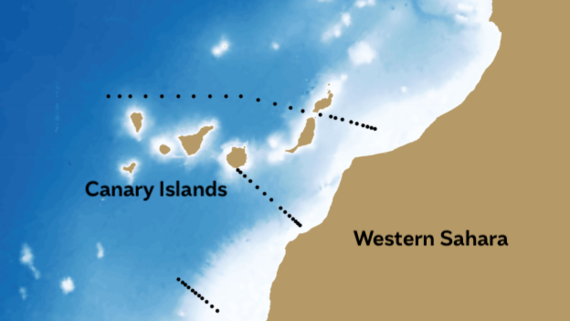 The track of the Raprocan sections.

One 3-headed float (on the left) and one of the two two-headed floats (on the right) deployed in the Canary Basin. The configuration parameters used were first a 3-day cycles and then 10-day cycles. © IEO/CSIC

Why is this experiment original?

The originality of this experiment is to integrate the sensors simultaneously on the same platform, thanks to the high payload capability of the Deep-Arvor profiling float. This allows to carry out perfectly comparable synchronized measurements in situ, to intercompare the accuracy of sensors. This intercomparison was done in close collaboration with RBR and Seabird, regarding integration, operation and data quality of their sensors.

This study gives a very valuable and unique dataset and the first data acquired are of good quality and show the good performance of the individual calibration of the RBR concerto in removing the pressure dependence of the salinity sensor. Further investigations are ongoing on the behavior of the three CTD probes. 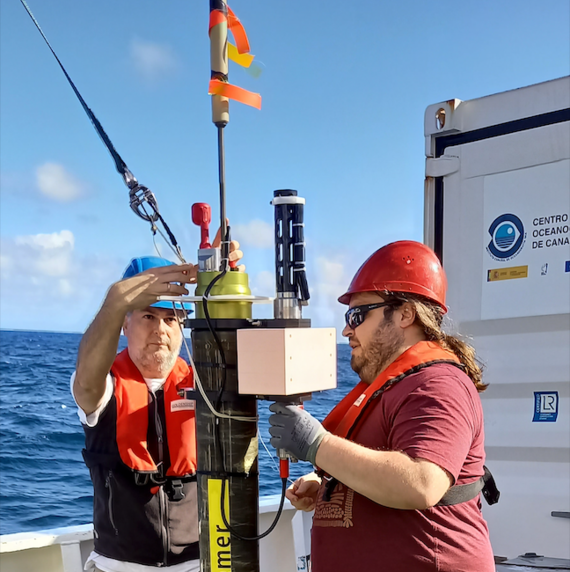 The 2-headed float being prepared by IEO and RDT. © IEO/CSIC

Previous work on the integration of sensors started by Ifremer

Firstly, the RBR concerto and Seabird SBE61 have been integrated on the sides of the Deep-Arvor profiling float, in addition to the usual SBE41 CTD, in order to cross-compare these 3 CTDs in situ. This float is named the 3-headed Deep-Arvor.

Secondly, the RBR CTD was installed instead of the SBE41, directly on the upper end cap of the float, in order to make another step in having an industrial product that allows diversifying sensors into Argo. The SBE61 is still installed aside, for cross-comparison purposes. This float is named the 2-headed Deep-Arvor and two units were developed within the project.

This work required a particular hardware and software development, and many qualifications. One particular difficulty was to keep all the CTDs synchronized during acquisitions and to manage CTDs numerous calibrations that had to be done regularly between each trial, so that data comparison remains valuable.