Subject to a strong anthropogenic pressure and particularly sensitive to climate change, the Mediterranean Sea is a major place of environmental, social and economic interests. French and Mediterranean biogeochemical oceanographers coordinate their efforts since many years, to better understand its particular hydrodynamics and the effects of key natural and anthropogenic forcings on ecosystems and organisms, from coastal zones to open-ocean.

Both of the western and eastern parts of the Mediterranean Sea are known to be oligotrophic, with areas of low biological productivity which negatively influences higher trophic levels. Only the northwestern Mediterranean Sea (NWM) exhibits a repetitive significant spring phytoplankton bloom (Figure 1, from D’ortenzio and Ribera, 2009), which seems to be linked with large winter deep convection episodes in this area.

In reality, both bloom and deep convection events seem the result and consequence of processes that take place over the previous 6-8 months. In order to investigate more precisely the links between the key bloom episodes to the mechanisms of forcing which occurs in the NWM, a large experiment called DeWEx (DEep Water formation EXperiment, Testor et al., 2018) has been set up during winter 2012-2013 in the framework of MISTRALS-Mermex program. The objective was to reconstruct the physical and biogeochemical "history" of the NWM water bodies and their potential evolution in the climatic change context.

By defining a novative experimental strategy, a complete seasonal cycle has been sampled and each step of deep convection events and settings of the spring bloom have been observed. Thanks to a multiplatform approach, a new reference data set has been collected that was used a benchmark for advancing the modeling of the surface fluxes, convective processes, dense water formation rates and physical-biogeochemical coupling processes.

Figure 1: Spring  phytoplankton bloom in the Gulf of Lion (from D’ortenzio et al. 2009)

Deep convection in the Gulf of Lion was first described by the MEDOC-Group (1970) in three phases:

DEWEX cruises have been scheduled to cover the 3 phases of open-sea convection (Kessouri et al., 2018).  The sampling strategy for the DEWEX experiment (Figure 2) was based on all in situ potential temperature, salinity, potential density and fluorescence of chl-a profiles, as well as currents and depth-average currents estimates collected thanks to ships, gliders, moorings, profiling floats and surface drifters. It included also four intensive oceanographic cruises (Table 1), leaded between July 2012 and July 2013 in the NWM in completion to MOOSE* and HYMEX* cruises, thus resolving a complete annual cycle. 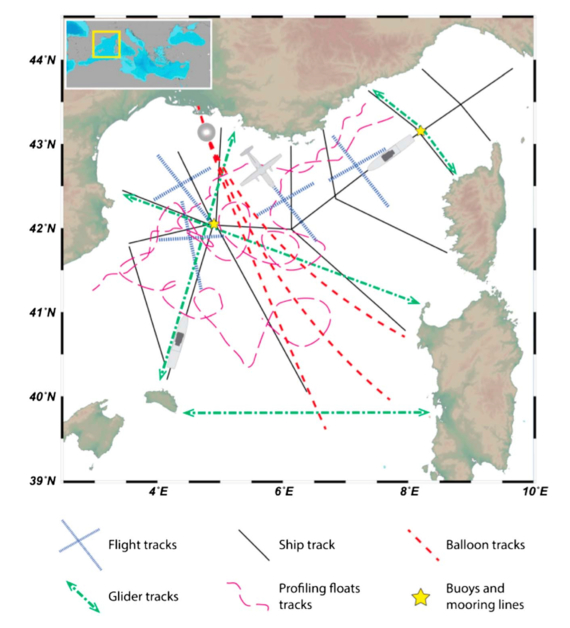 Figure 2 : Sketch of sampling strategy and examples of trajectory for airborne and oceanic platforms during the Deep Water formation Experiment (DEWEX) in the northwestern Mediterranean. From Conan et al., 2018

Table 1: List of Cruises carried out in the Framework of the DEWEX Experiment 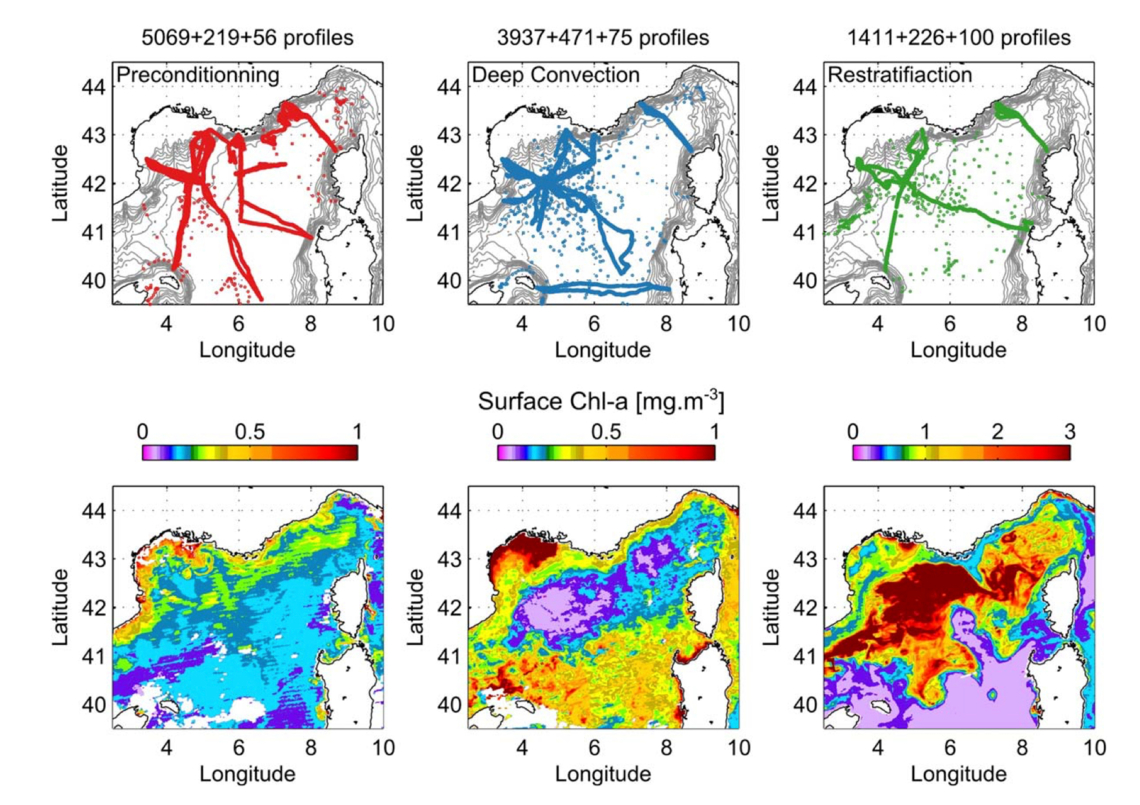 A total of 119 ship days and 500 CTD stations have been operated during one year of the study. Long-term observations have been performed with autonomous instruments deployed in the area:

Lastly, a coupled physical-biogeochemistry numerical model has been set up both to allow real-time monitoring of conditions and to improve modelling parameters using the in-situ data collected.

Thanks to a multiplatform approach enriched with new autonomous platform technologies (gliders and Argo profiling floats in particular), the DEWEX experiment provided a unique data set collected during one year in the Gulf of Lion. It has led to a better description of the underlying hydrodynamic processes at work before, during and after deep ocean convection events in the NWM Sea, and its link with an important spring phytoplankton bloom in this area.

-  Even if convection takes place at small spatial scales (a few kilometers) and at high frequency (typically a day), the resulting spring high productivity stimulates a significant biological response in the upper trophic levels. The interplay between the large scales, mesoscales, sub-mesoscales and convective scales has been particularly investigated. Small-scale circulation features have been highlighted and play a key role on deep convection and subsequent bloom.

-  For the first time, not only qualitative but also quantitative aspects concerning deep convection has been obtained thanks to this experiment, like estimates of mass and energy fluxes over a period of a year in the deep convection area and deep water formation rates.

-  Significant insights has been made, particularly with regard to the biodiversity of microbial organisms involved in the spring bloom and the export fluxes of matter to the deep layers linked to biological activities (Leblanc et al., 2018)

-  Thanks to this unique data set, a coupled hydrodynamic-biogeochemistry model has been calibrated and validated. Simulations on interannual variations in deep water formations and planktonic ecosystem response have been successful. The numerical model gives a good reproduction of winter mixing, water column restratification, as well as the nutrient stock in the surface layer and the structure and productivity of the phytoplankton ecosystem.

Finally, the DEWEX experiment motivates to develop the same multiplatform/multiscale strategy for other areas/processes. It also underlines the need for national and european collaborations to achieve such an experiment which allows a great step forward knowledge improvements.