Deployments of Argo floats in the Black Sea started in the early 2000s, opening new perspectives for operational oceanography in this region where the circulation is largely dependent on horizontal and vertical salinity gradients. Numerical model outputs and statistical analysis are used to assess present observing systems in the Black Sea and to explore the possible improvement resulting from using new observations.

The analysis is performed using Statistical Evaluation of Observing Networks (SEON) experiments and Statistical Evaluation of Simulated Observing Networks (SESON) experiments based on statistical reconstruction methods proposed by Schulz-Stellenfleth and Stanev (2010). Results in the similar and commonly used method (Observing System Evaluations and Observing System Simulation Experiments) are dependent on the specific error characteristics of the numerical model used in the analysis. One possible consequence of this is that an observation is only useful in a specific assimilation system if it provides more accurate state estimates than already available from the model. The advantage of the approach taken here is that it evaluates the ability of specific observing system to capture the general dynamics of the ocean state.

In addition to the Argo dataset, the numerical model NEMO is used in the study, together with Sea Surface Temperature and Sea Level Anomalies measurements from satellites.

The statistical method enables to compute a quantity named the relative explained variance (REV). The potential impact of point measurements on all state variables is estimated by averaging the REV maps obtained from single point measurements in space. The results are illustrated in Figure 1. 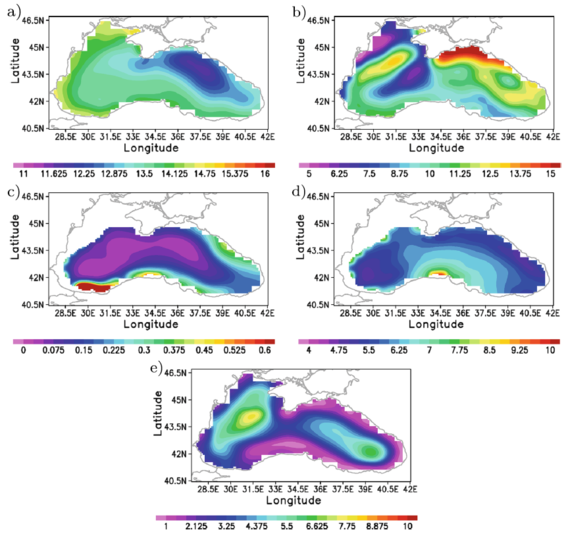 It is demonstrated that using SST data is very important only down to the base of the mixed layer (Figure 2). The error-patterns of salinity show clear signatures associated with the horizontal circulation, which can be considered as a proof that the salinity (Figure 3) represents much better the general state of the Black Sea circulation than the temperature (Figure 2). It is also shown that most of the improvements of the state estimates were due to using the Argo float data (Figures 2c, 2f, 3c, 3f). However, these data do not allow a good estimation in the shelf region, mostly because of the weak correlation between the deep and shelf ocean dynamics.

Figure 2. Vertically averaged over the upper 70m (top) and meridionally averaged for all latitudes (bottom) relative re-construction error in percent. In a) and d) SLA, SST and Argo data for the first period (1st June 2007 to 31st May 2008) were used. In b) and e) the remote sensing observation network only was used (because errors differ largely in the different experiments the displayed values in b)and e) are divided by 2.5). In c) and f) only Argo data for the first period have been used (here, the displayed values are divided by 1.5). (Fig. 7 in Grayek et al. 2015)

In the SESON experiments, synthetic observations provided by the model (including synthetic Argo float trajectories) are used. The accuracy of the pressure sensor which is important for the better resolution of the extremely sharp stratification in the upper layers appears as one important issue specific to the Black Sea. It is demonstrated that increasing the amount of Argo floats performs better than increasing the frequency of surfacing and that the present number of Argo floats operating in the Black Sea of about 10 seems optimal for operating purposes.