Global warming directly impacts the Arctic Ocean, particularly in its upper layer’s hydrographic characteristics. An increase of liquid freshwater content over both the Canadian Basin and the central Arctic Ocean has been observed (Zhang, 2016), which may be the consequence of an increase in the discharge of Arctic rivers (Jeffries, 2015).

In order to evaluate the part of the river discharges in the Arctic basin and to better assess its real influence in ocean dynamics, long-term in-situ measurements are needed along with efforts in numerical modelling. Unfortunately, surface temperature and salinity measurements are limited at high latitudes. In this context, remote sensing data from satellite observation systems are useful to provide information.

Launched in 2009, the SMOS* mission allow to produce new seven-years of Sea Surface Salinity (SSS) maps at high northern latitudes in the Arctic and Sub-Artic regions. Their quality is assessed in this study thanks to a large comparison with in-situ and others remote sensing datasets along with numerical modellings results.

Satellite observation dataset from the SMOS* mission is compiled for the period [2011-2017] in Arctic and Sub-Artic basins [50°N-90°N latitude] to retrieve SSS data and produce new SMOS SSS maps. These data are an improved version of the preliminary three-year dataset generated and freely distributed by the Barcelona Expert Center in 2016, using a recent developed SSS retrieval algorithm (Olmedo, 2017) which has been demonstrated to be consistent with ship and CORA 5.0 data (Garcia-Eidell, 2017). 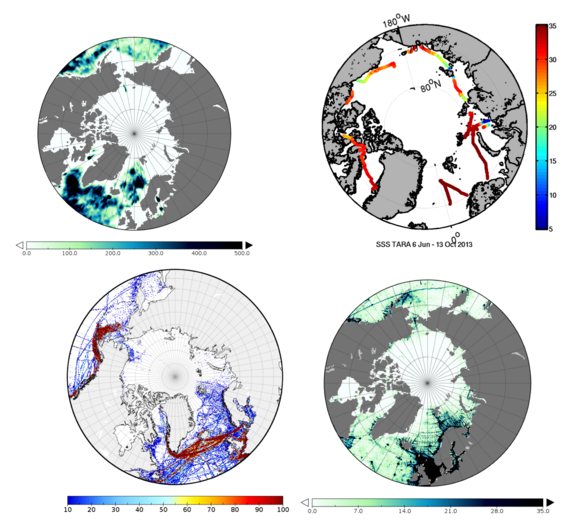 To assess the accuracy of this new seven-years product, SMOS SSS maps are compared with in-situ salinity data from Argo floats (Argo GDAC, 2000), thermosalinograph (TSG) measurements and TARA salinity (Reverdin, 2014),complementary remote sensing datasets from SMAP and Aquarius missions and maps produced by the TOPAZ* Arctic Prediction system (especially where no in situ measurements are available), and river discharge in situ measurements, provided by gauge measurements made under the Arctic Great Rivers project* (figure 1).

This study demonstrates the capability of SMOS-derived SSS to follow both the spatial and temporal variability in Arctic and sub-Arctic regions.

Validation of SMOS salinity maps at high latitudes against Argo floats (figure 2)show that the product has a std in the range of 0.24-0.35. SMOS and TSG SSS interannual variations are in agreement in the major features of the SSS dynamics, although, as expected, the spatial scales that are resolved by SMOS are blurred with respect to the ones resolved by TSG.

Results on the comparison of the SMOS SSS with TOPAZ, Aquarius and SMAP SSS close to two of the main rivers of the Arctic Ocean (the Mackenzie and Ob rivers) conclude that both SMOS and SMAP have great potential to routinely monitor the extension of the surface freshwater fluxes in the Arctic Ocean. 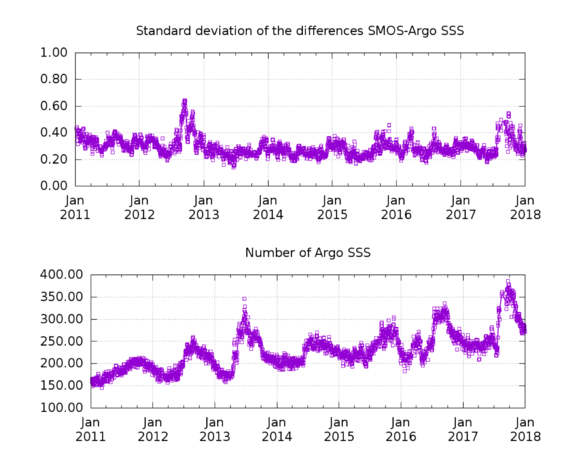 Figure 2. Time evolution of the standard deviation of the differences between SMOS and Argo SSS (top); and the number of measurements used in the comparison (bottom). The statistics are computed for data above 50N. Every SMOS nine-day map is compared with the Argo SSS available for the same nine-day period. From Olmedo et al., 2018.

Even though the original resolution of the SMOS SSS is about 40km, the selected correlation radii are likely too large to monitor some mesoscale features of these Arctic and Sub-Arctic regions. Future improvement with smaller radii of this SMOS SSS product are aimed at reducing the error of the salinity retrievals at high latitudes.

Finally, this study highlights also the need of implementing in situ measurements in Arctic regions both to improve assessment of the satellite products in these regions, and feed numerical models for obtaining and adjusted annual reference.