Deep convection is an important process for intermediate and deep-water masses formation and for deep ocean ventilation. Deep convection is particularly important in the North Atlantic Ocean because it contributes at setting the density of the lower limb of the Meridional Overturning Circulation. The Labrador Sea is the most famous place in the North Atlantic Ocean where deep convection occurs, forming the intermediate Labrador Sea Water (LSW). The Irminger Sea was also recognized as a possible site of deep convection (Nansen, 1912; Sverdrup et al.,1942) where LSW could also be formed but this result was forgotten during decades because of the lack of observations, especially in winter (Pickart et al., 2003b; de Jong et al., 2012). Argo floats provide a regular sampling of the Irminger Sea since the early 2000s, in particular during wintertime. Thus, the Argo program provided an exceptional sampling of the whole Irminger Sea in the 2011-2012 winter and some profiles exhibited Mixed Layer Depths (MLDs) reaching 1000 m. This study provides the first description of the different phases of the mixed layer deepening and their spatial extent. Owing to atmospheric reanalyses and to results of earlier studies we will then present the forcing terms responsible for this deep convection event.

Our study is based on the Argo dataset downloaded from the Coriolis Data Center in October 2012. We considered 1118 profiles from 68 Argo floats available between 52 and 66°N and between 44°W and the Reykjanes Ridge between September 2011 and September 2012. One float (WMO # 5902298) also provided dissolved oxygen concentration (O2). To perform a heat budget along the trajectories of the 4 floats (WMO # 4901163, 4901165, 4901166 and 5902298) that detected the deepest MLDs for this winter, the vertical profiles of those 4 floats were interpolated every 10 m from 5 to 1995 m. Good and probably good (QC flag 1 or 2) Argo data are used in this study. When available, the adjusted field is used. O2 data of float WMO #  5902298 have been corrected with respect to a reference profile collected at float deployment  following Takeshita et al. (2013).

In order to ensure a robust estimation of MLDs, two methods were used: the “threshold method” (de  Boyer Montégut et al., 2004), based on a density difference (∆σ) between the surface and the base of the mixed layer; and the “split-and-merge method” (Thomson and  Fine, 2003), based on the approximation of the profile by a suite of segments obtained in minimizing the number of segments while keeping the error (ε) between the real and the approximated profiles below a given threshold (the  MLD is then defined as the base of the first segment). The most suitable criteria for MLD estimation in the Labrador and Irminger Seas are ∆σ = of 0.01 kg.m-3 for the threshold method and ε = 0.003 kg2.m-6 for the split-and-merge method. The MLD was automatically estimated following the two methods and was then controlled by visual inspection of the profiles for a limited number of cases when the two estimates differed. In this study, we consider that MLDs greater than 680 m are the signature of deep convection in the Irminger Sea since it indicates ventilation of the lower limb of the MOC, so they are called « deep mixed layers ».

Analysis of Argo data during the 2011-2012 winter revealed the presence of an exceptionally large number of profiles (41) over the Irminger Basin with MLDs exceeding 680 m, which was deep enough to renew the pool of LSW located in the Irminger Sea (Figure 1). Among them, 4 profiles exhibited a MLD of 1000 m (Figures 2a, 2b, 2c), which was the maximum value observed this winter. The depth of the deep convection event is similar to that observed since 1997 by few localized profiles (Bacon et al., 2003; Våge et al., 2009; de Jong et al., 2012). The deep profiles were mainly observed in the eastern part of the Irminger Gyre characterized by the -55 cm Absolute Dynamic Topography (ADT) contour. 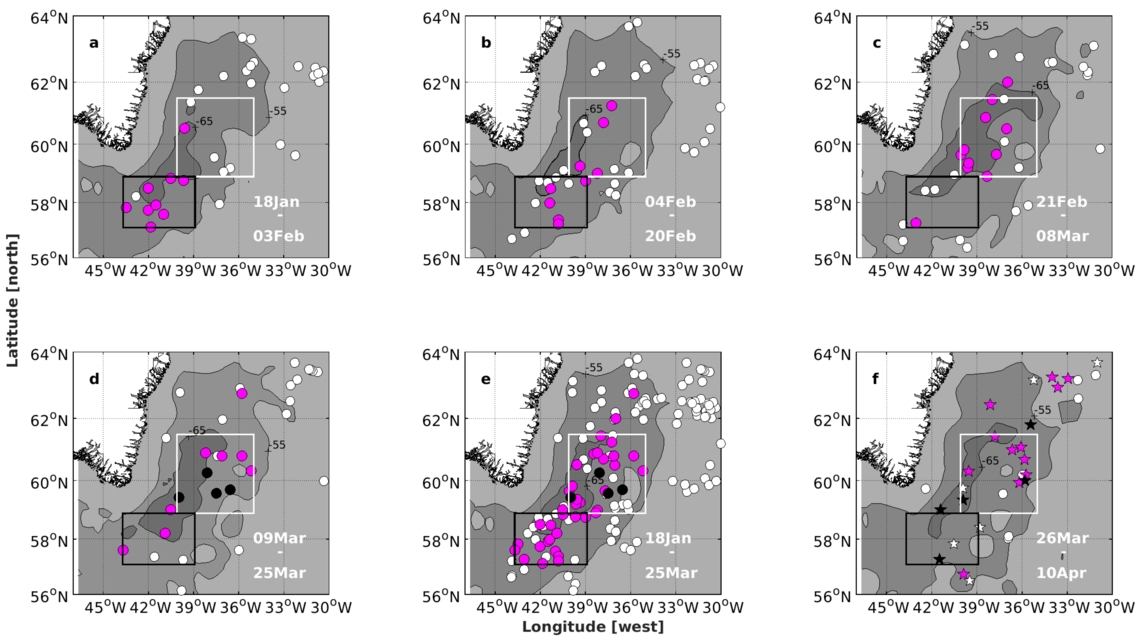 The deepening phase occurred in various steps. Two intense convective periods occurring in late January south of Cape Farewell and in late February-early March east of Greenland were separated by a period (early February) characterized by a less intense convective activity. A final deepening period was observed in mid-March during which the deepest mixed layers were observed (1000 m). This long deepening period was followed by a rapid restratification phase. The deepening of the mixed layer occurred in large regional areas. It is not excluded that the mixed layer deepening occurred simultaneously over a single large area extending from south of Cape Farewell to the northern part of the Irminger Gyre, as suggested by the few profiles exhibiting deep mixed layers east of Greenland in January and south of Cape Farewell end of February-mid March. This reveals that despite the exceptional sampling of the Irminger Sea during the 2011-2012 winter by Argo floats, an even denser and more uniform sampling would be needed for a full description of the spatial pattern of deep convection in the Irminger Sea.

The temporal evolution of the oxygen profiles from float # 5902298 witnesses the local and rapid ventilation of the mixed layer by the deep overturning events. Early March, very homogeneous oxygen saturation of 94-96% was observed from the surface to 800 or 1000 m, demonstrating the on-going convective activity (Figure 2d).

A mixed layer heat budget along the trajectories of the 4 floats that sampled the deepest mixed layers showed that heat loss at the air-sea interface was mainly responsible for heat content variations in the mixed layer (Figure 3). Greenland Tip Jet events enhanced the winter heat loss and two long (more than 24 hours), intense and close in time late events boosted the mixed layer deepening down to 1000m. They occurred at a period of the year generally characterized by the beginning of the restratification period.

As revealed by this study and by earlier studies, pertinent indicators to assess the favorable conditions for the development of deep convection in the Irminger Sea are: net air-sea fluxes, number of Greenland Tip Jets, especially in late winter, stratification of the water column represented by ADT, NAO index and Ekman-induced heat flux. During a deep convective event, the contribution of the Ekman-induced heat loss anomaly can be as large as 47% of the total winter heat loss anomaly. When considering each of those indicators, the 2011-2012 event is not significantly different compared to the other documented deep convective events. None of those indicators is either sufficient or necessary for the development of deep convection in the Irminger Sea. It is thus impossible to know in advance the volume of dense water masses formed by convection as it depends on the uncertainties associated with synoptic scale atmospheric conditions, particularly during the pivotal period at the end of the long period of winter preconditioning.