The northern flank of the Greenland Sea has a crucial meaning for the exchange between the Arctic Ocean (AO) and the Nordic Seas. Here, in the deep Fram Strait water masses coming from north and south mix and undergo substantial transformation. Warm and saline water of the Atlantic origin (AW) flows over the eastern slope with the West Spitsbergen Current (WSC), while fresh and cold water of polar provenance continues southward joining the East Greenland Current (EGC) along the Greenland Sea’s western bank. While the surface AW cools down due to interactions with atmosphere and melting sea ice, it gets denser and sinks. This water partly returns southward and forms the Greenland Sea's intermediate layer together with AO intermediate water. The deepest near-bottom water renewal (limited by the sill at 2600 m) is as important as the upper ocean exchange, since this is the only deep connection between the Arctic and the rest of the global ocean. This is particularly significant as the Greenland Sea’s deep water keeps warming (Langehaug and Falck, 2012; Somavilla et al., 2013; Von Appen et al., 2015; Latarius and Quadfasel, 2016 ; Marnela et al., 2016).

All in all, dozens of Argo floats have been circulating in the Nordic Seas since 2001. Mean circulation pattern at ~1000 dbar (dominant parking depth of all the deployed floats) is shown in the map (Fig. 1). It is based on the ANDRO data product (Ollitrault and Rannou, 2013) and uses Matlab quivermc function ( http://www.mathworks.com/matlabcentral/fileexchange/47314-quivermc) for plotting the georeferenced vector fields. All the main currents are well visible and the importance of underwater ridges (the Mohns and Knipovich Ridge system) in the recirculation is clear. Among all the Argo floats, several devices were also deployed in the eastern part of the Norwegian and Greenland Seas, mostly for the AW tracking. Besides them, some floats deployed in other basins of the Nordic Seas and upstream in the North Atlantic have reached the northernmost region. Trajectories of floats drifting at various depths are shown in the map (Fig. 2). This allows to observe how the bottom topography influences the deep and intermediate flow. 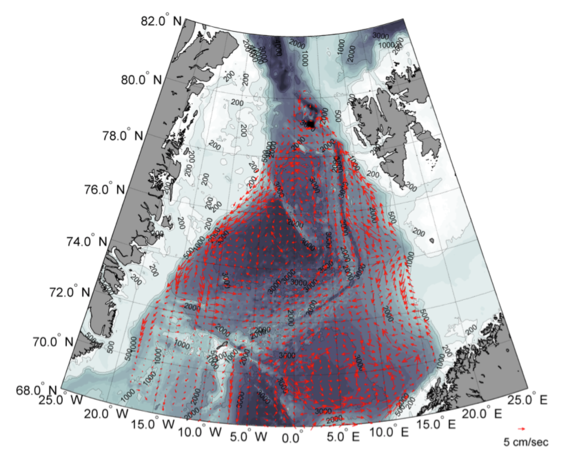 Figure 1. Mean circulation pattern at ~1000 dbar (950-1150 dbar) derived from the ANDRO data. All the available Argo floats are included (from all seasons 2001-2013). Velocity u and v data are gridded every 0.25 degree meridionally and every 1 degree zonally. The bathymetry shades are based on the IBCAO 1.0 dataset, sampled to 2' cell averages (ETOPO2v2). The latest version IBCAO 3.0 (Jacobsson et al., 2012) is available but not used here. 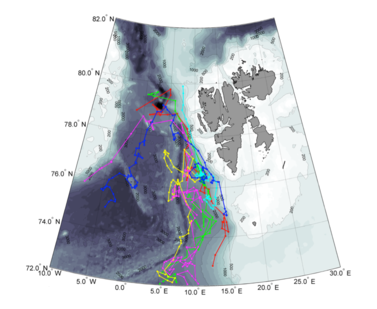 In a smaller scale the bottom topography can trap a float. This happened to the Argo float deployed west of Spitsbergen in summer 2014. Drifting at 1000 bar, it spent almost the whole time until 3th January 2016 near its deployment site (Fig. 3). The float finally managed to escape the trap and most presumably drifted under the ice east of Greenland or north of Svalbard. Originally, the plan was to switch on again the experimentally installed Inertial Navigation System (INS) via the Iridium connection in order to collect more data of underwater displacement under the ice (Walczowski and Goszczko, 2015). Unfortunately, the float unexpectedly stopped communicating. 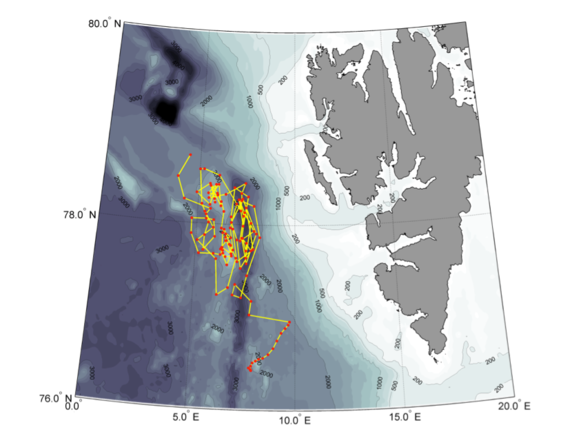 Figure 3  : Surfacing positions of the Argo float (WMO# 6902042) deployed west of Spitsbergen in July 2014 under the E-AIMS EU Project, starting from the south and displaced farther northward by the deep flow (1000 dbar). The first 16 locations show daily surfacing while the float was drifting at 500 dbar. The Inertial Navigation System (INS) was tested as a possible solution for the Arctic floats drifting under the ice. Finally, the float moved towards the Molloy Deep (5669 m) after more than a year of circulating round the underwater mountains (Svyatogor Rise, 1498 m depth) and deep trenches of the Knipovich Ridge System (surfacing every 5 days).