The results from the measurements reported by Argo floats indicate that the Canary Island archipelago disrupts the deep poleward undercurrent even at depths where the flow is not blocked by the bathymetry. The deep poleward undercurrent flows west around the eastern-most islands and north east of the Conception Bank to rejoin the intermittent branch that follows the African slope in the Lanzarote Passage.

Data collected from one ArgoFloat WMO 690072 are analyzed to get observations of the poleward undercurrent of the CanCEBS. Argo float 6900772 has been deployed the 28th October 2010 with a classical programmation : a parking depth at 1000 dbar, a profiling depth at 2000 dbar, a cycle-time of 10 days, a vertical resolution ranging from 10 dbar in the top 350 dbar to 50 dbar below 500 dbar. 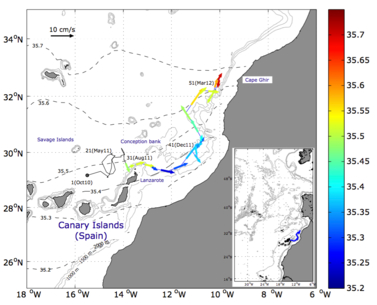 Figure 1. Trajectory of Argo float WMO-690072 in Canary Current Eastern Upwelling system. The arrows represent the velocity at the parking depth (between two profiles), color-coded with the salinity at the parking depth. There are arrows only after the float enters the Canary deep Poleward Undercurrent (CdPU) (profile 33); prior to this, the float trajectory is a thin black line. The labels correspond to the number and the month/year of a pro- file. The dashed lines represent the climatological for salinity at 1000 m. Grey arrows correspond to velocities from other (5) Argo floats in the area.The isobaths for 1000 m, 1500 and 2000m are labelled with a grey line.

During the 10 months after deployment (31 profiles, October 28th 2010 - August 24th 2011), the float was trapped in a deep cyclonic circulation slightly north of the deployment position (Fig. 1). During these 31 profiles, the waters at the parking depth were composed of a mix of waters with S about 35.5, halfway between the characteristic salinity of the Mediterranean Outflow waters (MOW) and the Antarctic Intermediate Waters (AAIW) (Figure 2).

Once the float drifted near the deep slope of the easternmost Canary Island, Lanzarote, on September 3rd 2011 it began to move northward in one branch of the Canary Deep Poleward Undercurrent (CdPU). After September 3rd, and during a month (profiles 32-34, September 3rd – September 23rd 2011), float WMO-6900772 moved eastward in the channel between Lanzarote and Conception Bank. During this month, the float measured a mix of AAIW-MOW with S about 35.5 at the parking depth, indicating that it was already riding the CdPU.

East of Lanzarote (profile 35), the salinity at the parking depth (S<35.4, Figure 2) indicated that this branch of the CdPU begins to freshen, entraining additional AAIW. During the following 7 months (profiles 34-53, September 23rd 2011 – March 31st 2012), the float followed the CdUP north-northeastward, along the North-Africa slope. During this north-northeastward transit, the salinity at the parking depth, increased from S<35.3 to S>35.6 at the northernmost profile (52), indicating the gradual mixing of the MOW and AAIW as the CdPU flows north.

Figure 2. θ/S diagram of the profiles sampled by the Argo float WMO-690072, color-coded with the sampling time. The θ/S lines are thinner before the float enters the CdPU. The dots represent the mean θ/S properties sampled at the parking depth (1000 dbar). Only dots after the float enters the CdPU are shown. The grey boxes represent the four waters masses described in the text. The θ/S properties at the parking depth are represented in the inset with labels every 5 profiles. The color scale is the same as the θ/S diagram.

Although the mean speed of float WMO-6900772 during its life was 3 cm/s, there were distinct periods of slower and faster movement. During the time the float was circulating cyclonically west of Lanzarote the mean speed was 2 cm/s. The mean speed accelerated to 9 cm/s after the float moved through the channel between Lanzarote and Conception Bank, at the same time that the salinity at the parking depth reached its minimum value. Subsequently the mean speed slowed to 5 cm/s, with a minimum south of Cape Ghir, where the float was trapped in a cyclonic circulation with a mean speed of 2 cm/s, probably associated with the deep mesoscale structures that develop around the Cape Ghir submarine canyon.

The annual cycles of temperature and salinity for the upper 300 m (upper panels in Figure 3a,b) exhibited the typical variability of the water column for the upwelling zone of the CanCEBS. The maximum stratification occurred during the period June-October, when the solar heating and also the winds are the strongest in the region. The mixed layer begins to develop after this, reaching its maximum at the end of the Winter, with values up to 140 m in March 2011. During the 2012 winter (December-March), the float encountered the Cape Ghir filament, and the thick (>200 m) homogenous layer of temperature and salinity during this period was associated with the filament. At deeper levels (lower panels in Figure 3a,b) the fingerprint of the warm and salty Mediterranean waters and the drifting of the float from mixed MOW/AAIW, to AAIW and finally to MOW is clearly observed both in temperature and salinity. 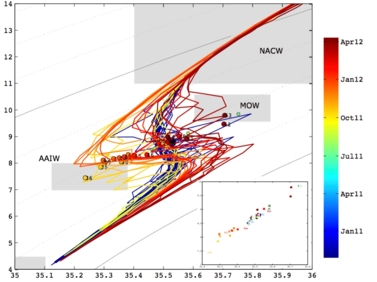 Figure 3. Evolution of Temperature and Salinity sampled by the Argo float WMO-690072, color-coded with the sampling time.

The results indicate that the Canary Island archipelago disrupts the deep poleward undercurrent even at depths where the flow is not blocked by the bathymetry. The deep poleward undercurrent flows west around the eastern-most islands and north east of the Conception Bank to rejoin the intermittent branch that follows the African slope in the Lanzarote Passage. This hypothesis is consistent with the AAIW found west of Lanzarote, as far as 17°W. But also, this hypothesis would be coherent with a cyclonic circulation associated with the Savage Islands, the Conception bank and the Canary Islands sub basin that would redistribute the AAIW northeast of the Canaries.