The South Indian tropical gyre expands south of the equator, and down to 18ºS, from the east coast of Africa to the west coasts of Sumatra and Java (Figure 1). Concomitant to the cyclonic gyre there is an open-ocean upwelling system, known as the Seychelles-Chagos Thermocline Ridge (SCTR) (Hermes and Reason, 2008). This work investigates the seasonal variation of the South Indian tropical gyre and the SCTR based on satellite altimeter data and an Argo-based global atlas of ocean temperature and salinity. Complexity of the Tropical South Indian Ocean (TSIO) is mainly a response to its unique location. On the one hand, it is influenced to the north by the semiannual Indian monsoon and to the south by the persistent southeasterly trades (Schott et al., 2009); on the other hand, it is fed by an annual inflow of Pacific water of remote origin, the Indonesian Throughflow (ITF) (Woodberry et al., 1989; Gordon et al 1997; Yokoi et al., 2008).

Results provide an updated view of the Tropical South Indian Ocean where the ITF, among other forcings, is suggested to play a major role on the recirculation regime of the tropical gyre, resizing the longitudinal extent of the upwelling system seasonally (Aguiar-González et al., 2015).

The improvement on the estimates of altimeter-derived equatorial semi-geostrophic velocities (CNES, 2015), provides us with an unprecedented opportunity to address the study of the South Indian tropical gyre based on synoptic long-term observations. The Absolute Dynamic Topography (ADT) data used here are the latest version (Duacs 2014, v15.0 version) of merged and gridded satellite altimeter observations for the period 1993-2014 produced by SSALTO/DUACS and distributed by AVISO with support from CNES.

The inflow of Pacific water appears as one of the most intriguing players in the seasonal variations of the TSIO. For the study of the thermohaline distribution of the tropical gyre and the impact of buoyancy fluxes introduced by the ITF, we use a temperature and salinity annual mean and seasonal atlas, the CSIRO (Commonwealth Scientific and Industrial Research Organisation) Atlas of Regional Seas (CARS09) version 2011.1.0. This atlas originates from different sources of quality-controlled vertical T-S profiles, including the Argo global archives up to May 2009 (Ridgway et al., 2002; Condie and Dunn, 2006).

Additionally, we compute referenced geostrophic velocities using the thermal wind relationship and a level of no motion at 1800 m depth. In this regard, Stramma and Lutjeharms (1997) found that density surface σ2=36.94 (depth range 1500-2500 m) in the Indian Ocean is an adequate reference level of no motion, zref, for the geostrophic computation in the subtropical region, north of 40ºS. The TSIO extends farther north. Nevertheless, we note that computation performed with zref at different levels within the range of depths of discussion provides similar results also for the remaining region of the TSIO, i. e. 2ºS-10ºS.

We explore the large-scale variability of the tropical gyre and the Seychelles-Chagos Thermocline Ridge based on a set of climatological fields of ADT (Figure 1). Assuming a geostrophic balance, altimeter-derived velocities can be derived from the ADT fields. Accordingly, a prominent low in ADT is suggestive of a cyclonic geostrophic circulation, and therefore of an upward displacement of the isotherms, which sustains the geostrophic flow and leads to an upwelling site. The opposite occurs when a prominent high of ADT is found, pointing to an anticyclonic circulation which promotes the downward displacement of the isotherms (downwelling). The black box in each panel delimits the full domain of the cyclonic tropical gyre as one would note from the altimeter-derived circulation (not shown). 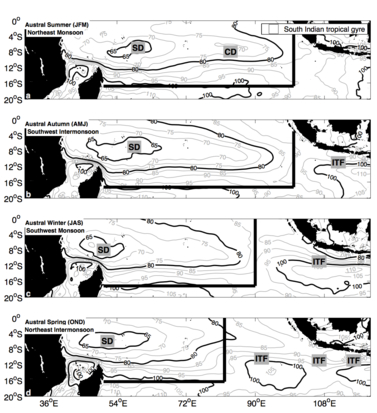 The SCTR and the Seychelles Dome (SD) are embedded, respectively, within the 80 cm and 65 cm isolines. The ITF lies along the northern flank of the 100 cm isoline, departing from the Indo-Australian Basin. A fourth isoline, while not emphasized, must also be noted: a 70 cm low of ADT contouring the secondary dome in the east near the Chagos Archipelago, the Chagos Dome (CD). The latter is well-defined at the surface only during summer. Generally speaking, two large-scale features appear to dominate the basin-scale annual cycle: 1) the Seychelles-Chagos Thermocline Ridge, shown as a year-round elongated low of ADT, which resizes throughout the year, suggestive of a simultaneously persistent tropical gyre and open-ocean upwelling system; and, 2) the westward propagation of a high of ADT exiting the Indonesian passages and leading to a zonal front when encountering the SCTR from winter to spring.

Figure 2 further explores these two features showing the monthly evolution of the upper ocean, zonally averaged between 7ºS-12ºS. The SCTR is highlighted by the 20ºC isotherm (black contour). Upwelled Tropical Surface Water (TSW) from the SCTR and Indonesian Throughflow Water (ITFW) are roughly represented by, respectively, water saltier than 34.9 psu and fresher than 34.7 psu (black contours). From the encounter of the TSW and the ITFW we observe that an annual thermohaline front emerges, which we call The Indonesian Throughflow Front (ITFF). 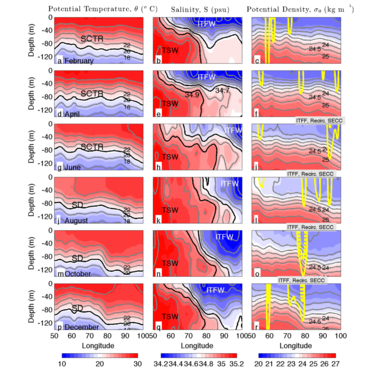 When a new pulse of ITFW is discharged, the westward advance of the ITFF collocates with the westward advance of a southward flow of core velocities ranging from 5 to 10 cm s-1 (yellow contours) and reaching down to 150 m (see Figure 2; panels (g)-(r): June-December). The longitudes at which this meridional geostrophic flow resides are in agreement with the seasonal eastern shrinkage of the tropical gyre, observed from winter to spring in Figure 1. Thus, we identify this southward geostrophic flow with the recirculation of the eastward South Equatorial Countercurrent (northern branch of the gyre) on feeding the westward South Equatorial Current (southern branch of the gyre). Furthermore, the Seychelles-Chagos ridge is shown to experience a relaxation in the east (Figure 2), evolving to a dome-like feature (the SD) in the west as the ITFF advances. This phenomenon is enhanced by the western intensification of the Sverdrupian tropical gyre during winter (Aguiar-González et al., 2015)

As observed from satellite altimeter data, the most outstanding feature at basin scale is the seasonal shrinkage of the South Indian tropical gyre and the Seychelles-Chagos Thermocline Ridge, from late autumn to spring. A complementary inspection of the upper ocean thermohaline properties from an Argo-based climatology suggests that the eastern flank of the gyre migrates over 20º and collocates with the westward advance of a zonal thermohaline front, the Indonesian Throughflow Front. The ITFF emerges from the encounter between upwelled Tropical Surface Water and relatively warmer and fresher Indonesian Throughflow Water. We suggest this thermohaline front plays an important role as remote forcing to the tropical gyre, generating southward geostrophic flows that contribute to the early closure of the gyre in the east before arrival to Sumatra.