1 The University of the South Pacific (USP), PaCE-SD, Suva, Fiji

2 The Max-Planck-Institute for Meteorology, the Ocean in the Earth System, Hamburg, Germany

In the heart of the Southwest Tropical Pacific Ocean (SWTP), nestled between the northeast coast of Australia, Papua New Guinea, the Solomon Islands, Vanuatu and New Caledonia, the Coral Sea is undoubtedly one of the most beautiful treasures on our planet. An important area of the Coral Sea shelters a large part of marine life with an exceptional biodiversity and has been classified as a Protected Marine Area. Better documenting and understanding the oceanic circulation and its variability, the connectivity of the ecosystems is thus essential.

The Coral Sea is dotted with a vast number of islands and is a region where different water masses meet and interact. It is important to deepen our knowledge in this remote region, of the properties and dynamics of the water masses that cross it. In particular, it’s crucial to quantify the contribution to the mixing and transport of these waters by small oceanic structures such as eddies, which are often highly energetic but difficult to track in real-time.

This study aims to describe the main surface characteristics of mesoscale eddies in the SWTP thanks to satellite altimetry data and their vertical structure reconstructed by Argo floats. The objective is to investigate the generation, propagation and surface properties of eddies and to examine their vertical extent in terms of temperature, salinity and swirl velocity to evaluate how deep they affect the mean currents and the physical properties of the water column.

In the study region [142°E to 172°W and 10°S to 30°S], two complementary data sets are combined for both the detection and the tracking of eddies at the surface and deeper : satellite altimetry and Argo floats.

- At the surface, Daily Sea Level Anomaly (SLA) maps from Aviso Ssalto-Duacs 2014 altimetry product between January 1993 and May 2014 are used to automatically identify and characterize meso-scale eddies (about 50 km to several hundred kilometres). Mesoscale eddies are detected on these SLA maps using the SLA-based eddy detection algorithm developed by Chaigneau et al., 2009. The retained eddies are temporally tracked from their genesis to their dissipation using the algorithm developed by Pegliasco et al., 2015. Finally, about 14,000 eddy trajectories are detected for this period in the study region.

- The eddies’ vertical structures are then determined from about 28,682 Argo floats profiles located within anticyclonic or cyclonic eddies between 1 January 2003 and 1 May 2014. From their vertical temperature and salinity profiles collected between the surface and 2000 meters deep, anomalies relative to the seasonal climatology by Roemmich and Gilson, 2009 are computed for each profile. 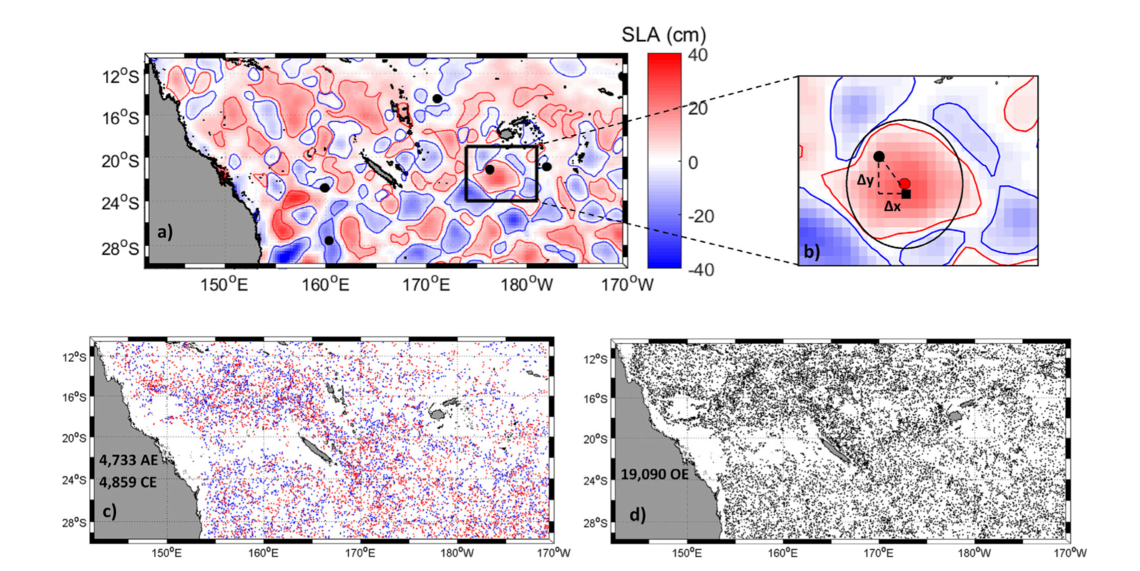 Figure 2. Eddy detection algorithm, definitions, and classification of Argo profiles. (a)SLA on 07th January 2005 from Aviso on a 0.25° x 0.25° grid. Detected eddy edges are shown in red (AE) and blue (CE) contour lines and Argo floats that surfaced on the same day are shown as black filled circles. (b)Illustration of the eddy characteristics and floats’ positions (black filled circle) relative to the corresponding eddy centers (black filled square); the eddy centroid (red filled circle) and the equivalent circle of radius (black solid line) are also shown. The relative positions of the floats to the eddy center are shown with ∆x and ∆y. (c)Location of Argo floats that surfaced into AE (red) and CE (blue) between 1st January 2003 and 1st May 2014.(d)Same as (c) but for Argo floats surfacing outside eddies (OE). The numbers of profiles that surfaced into AE, CE, and OE are indicated over Australia. Source : Keppler et al., 2018

The results are shown in five dynamically different subregions for the northern (N1, N2) and the southern (S1, S2, S3) part of the study region, as mentioned Figure 1.

Eddy Characteristics at the surface

When considering the study region as a whole, eddy characteristics (Figure 3) are similar to the findings on global eddies from Chelton et al., 2011: the mean eddy radius is found to be ∼100 kms ; the mean amplitude of ∼8 cm, increasing southward and being maximum in the East Australian Current ; the mean EKE inside eddies is found to be ∼200 cm2s-2.

Eddies and their characteristics are not evenly distributed around the study region but exhibit a clear latitude dependency. There are considerably more eddies toward the south of the region and fewer eddies in the northern part, especially east of 165°E and north of Fiji and Vanuatu archipelagos.

Figure 3.Mean eddy characteristics computed on 1°x1° grid. (a)Number of eddies; (b)Radius (in km); (c)Amplitude (in cm); (d)EKE (in cm2s-2); White areas are regions shallower than 200 m. The right panel shows the mean values of each parameter as a function of latitude for AE (red) and CE (blue). For the radius, the mean theoretical first mode Rossby radius of deformation for the study region is added in black. The same subregions as in Figure 1 are marked: N1 (magenta), N2 (green), S1 (yellow), S2 (blue), and S3 (red). Source : Keppler et al., 2018

The locations of eddy generation (first detection) and decay (last detection) are also investigated. The majority of eddies (88%) form within the study region while only about 12% are generated outside and propagate into the region, usually from the east. The numerous islands of the study region seem to affect the eddy behavior as most eddies are formed in the lee of islands, propagate westward and decay when encountering shallow bathymetry.

From Argo vertical profiles, the observation is that ∼17% surfaced into AE, ∼17% into CE and ∼66% surfaced outside of eddies (Figure 2). 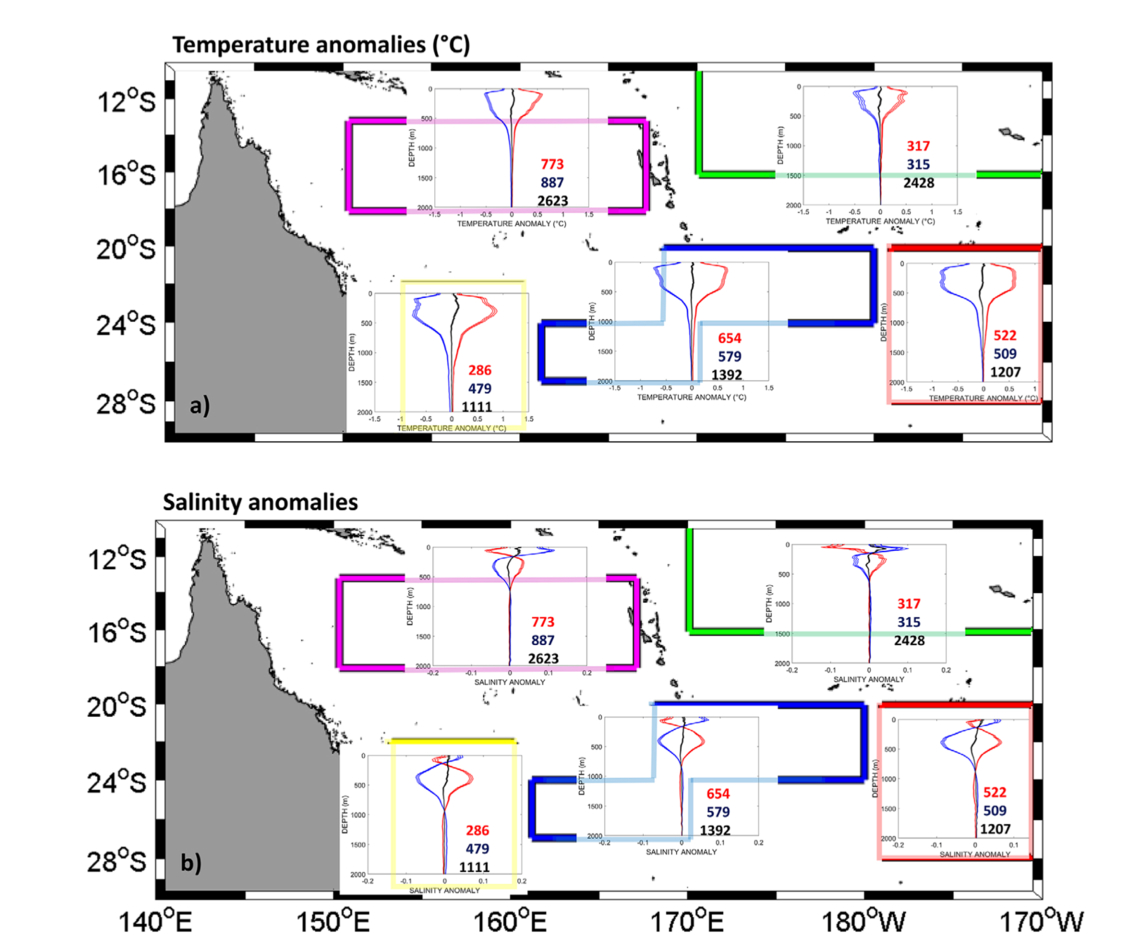 Figure 8. Vertical composite structures of temperature and salinity anomalies in the study region for each of the 5 subregions (demarked with colored shapes in Figure 1). Mean anomalies within AE (red), CE (blue) and OE (black) are shown as solid lines for (a)temperature and (b)salinity. The integers indicate the number of floats used to calculate each mean profile in the corresponding colors for AE, CE, and OE.

Eddies in the five subregions have a vertically anti-symmetric structure when comparing AE and CE (Figure 3) with typical temperature (salinity respectively) anomalies of +/- 0.5°c (0.1) and they tend to extend deeper South of 20°S. When eddies swirl faster than they propagate, they can trap and transport water masses along their trajectory :

-       In the tropical area north of Fiji, eddies are sparse and short-lived, impacting only the top 200 meters of water. They do not appear to be able to trap and transport waters in this region.

-       In the Coral Sea, a region of lateral shear between currents transporting waters of different origins, eddies are numerous and energetic. They affect the water properties down at least 500m depth, and anticyclonic eddies trap and transport waters to about 200m, contributing to the upper thermocline waters mixing and transport.

-       South of New Caledonia, mesoscale eddies are ubiquitous and long-lived, with typical lifetimes longer than 5 months. They affect the temperature, salinity, and velocities down to about 1,000 m depth, and weakly contribute to the mixing of lower thermocline waters.

The observations conclude to that eddies can affect water properties down to about 100m in the North (10°S to 20°S) and about 300m in the South (20°S to 30°S); anticyclonic eddies in the Coral Sea participate in the redistribution of  tracers and water-masses along their trajectories in the upper 200m.

This work takes advantage of the complementarity of two widely used data sets: Sea Level Anomaly (SLA) data from satellite altimetry allowing detection of mesoscale eddies at the surface, together with vertical temperature and salinity profiles from Argo floats surfacing into eddies.

It highlights the high variability of small oceanic structures in this key area of the Coral Sea. Even with thousands of vertical Argo profiles sampling AE and CE properties, vertical temperature and salinity anomalies inside eddies are scattered around the mean composite. Whether such dispersions are linked to the diversity of eddy vertical structures, to errors in the interpolated altimetric fields, in the detection method, or to other sources of variability such as interannual variability or internal waves is not known and could also be investigated using oceanic model simulations.

Finally, the temporal variability of the eddy occurrence, and more specifically, the interannual variability of eddy structures can be further investigated in this region influenced by ENSO (El Niño Southern Oscillation). Their role for the mixing could be modulated at interannual timescales. Supplementary observational data sets could be used to investigate the vertical structure of eddies near the coasts and their behavior around islands. The impact of eddies on primary production could be analyzed by colocalizing the detected eddies with satellite maps of ocean color; and their impact on coastal areas and their ability to trap and transport coastal waters to the open ocean should be investigated.