New features of the mid-depth circulation of the eastern tropical South Pacific are obtained thanks to Argo profiling floats, and demonstrates how profiling floats are helpful tools in many ways to monitor and analyse changes within the oxygen minimum zones.

In all tropical oceans areas of extremely low oxygen exist. Selected tropical time series reveal an oxygen decrease in 300-700 m depth and a vertical expansion of the oxygen minimum zones (OMZs) during the last 50 years (Stramma et al. 2008). Should the observed decrease in oxygen continue, this could lead to habitat compression, shifts in animal distribution and a loss of biodiversity with impact on fisheries and economics.

Oxygen time series from historical measurements augmented with float data reveal a significant negative trend at a rate of -1.23 ± 0.67 μmol/kg/yr during 1976-2012, averaged in the Pacific region of the westward flowing South Equatorial Current and the South Equatorial Intermediate Current between 2-5°S, 84-87°W (Figure 1). Geomar studies are focussing on the factors controlling the long-term trend and variability of dissolved oxygen which might be linked to climate modes such as the Interdecadal Pacific Oscillation, El Niño and the Shallow Tropical Cell.

As the OMZs are situated at the eastern boundaries of the tropical oceans, eastward currents are a major path of oxygen into OMZs it is important to gain knowledge about the circulation and its variability to understand the on-going changes in OMZs. Floats with a parking depth at 400 m show fast westward propagation in the equatorial channel and sluggish flow in the low ventilated centre of the OMZ (Figure 2). 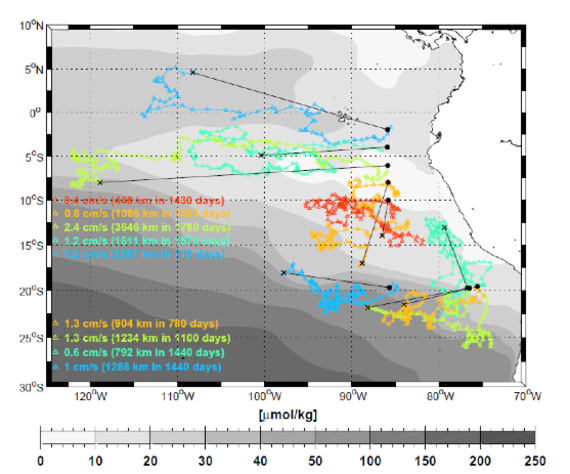 In the OMZ the mean flow is strongly overlaid with eddy activity on the poleward side of the OMZ. Eddies have been identified as major agents for the exchange between coastal waters and the open ocean. Coherent/isolated mesoscale eddies can exist over periods of several months, even years. Propagating generally westward after formation in the coastal regions, eddies are particularly important for the transport of properties into the OMZs, which are located at the eastern boundaries of the tropical oceans.

In addition to such transport, the local eddy dynamics can create distinct biogeochemical anomalies within these eddies. In order to understand the local processes as well as the large-scale impact of the mesoscale eddies, interdisciplinary field studies were carried out in the Atlantic and in the Pacific Ocean using Argo float data. Floats with oxygen sensors clearly show the passage of eddies with oxygen anomalies. One float stayed for more than half a year in a cyclonic eddy showing two cyclonic loops. The cyclonic rotation leads to an uplift of isopycnals and thus colder and more saline water as well as low oxygen is uplifted into the upper ocean (Figure 3) which might have an impact on the biological productivity. The strongest oxygen anomalies can be seen in 300 m depth.

Profiling floats are helpful tools in many ways to monitor and analyse changes within the OMZs as they are ideal for continuous sampling of data especially in regions where data density is scarce. Besides profiles of temperature, salinity and pressure, additional parameters such as oxygen can be measured to fill the gaps in time series or to extend them. Floats are able to register the water mass and oxygen changes of an eddy when trapped in one. 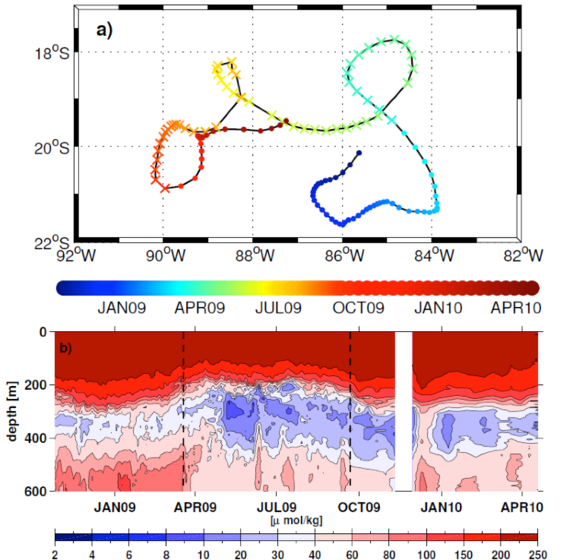 Figure 3: Measurements of a float in the tropical eastern South Pacific showing the float path (a) and the oxygen distribution versus time in the upper 600 m. The residence time of the float in the eddy is marked by Xs (a) and dashed black lines (b).