The exponential climate change threatens the social and economic balance of our society as a whole, as well as the health and well-being of everyone. In this context, monitoring the ocean has become a real necessity in response to the challenges of earth’s sustainable development.

For several decades from now, satellite observations of the ocean have been richly supplemented by numerous in-situ observation networks, set up by the international scientific community and developed thanks to innovative technological breakthroughs. These observations are crucial information for increasingly efficient numerical models, both for their initialization and for their adjustment to forcing.

This study is further evidence of the combined contribution of observations and numerical modelling to a better understanding of ocean dynamics. Conducted on a global scale and over a more 10-year period, it demonstrates the ability of observations to improve the numerical representation of the state of the ocean as a whole, from its mean state to different scales of variability.

The PSY4 system was initialized on 11 October 2006, based on temperature and salinity profiles from the EN4 monthly gridded climatology (Good et al., 2013) averaged for the period October-December 2006. From this initial state and for the referencing period [2007-2015] on the global ocean [65°N-65°S], a PSY4-Oper simulation has been performed in parallel with a twin-free PSY4 simulation, without any assimilation of in situ and remote observations - called “PSY4-Free” hereafter.

Thanks to a wide range of diagnosis and statistics from surface to subsurface, the 2007-2015 annual mean and oceanic variability have been compared between PSY4-Oper (with data assimilation), PSY4-free (without any data assimilation) along with SCRIPPS Argo and DUACs satellite products.

The modeled large-scale variability at a global scale is consistent in comparison to observation products, both for PSY4-Oper and PSY4-Free, which is of great interest for other research activities such as impact studies for observing system design.

A comparison of surface (figure 2) and subsurface fields demonstrates the critical role of observations for constraining model behavior in significantly reducing biases. At the surface, warm SST bias in upwelling regions and fresh SSS bias in the Amazon and Orinoco regions are strongly reduced in the PSY4-Oper simulation in comparison to the PSY4-Free simulation. The position of the main global structures, such as WBCs and subtropical gyres, has changed in agreement with observation data sets. In the subsurface, the depth gradient along the thermocline has globally increased, but work is still needed to improve representation of the upper-ocean thermal stratification, which remains too diffuse in comparison to the SCRIPPS Argo product. 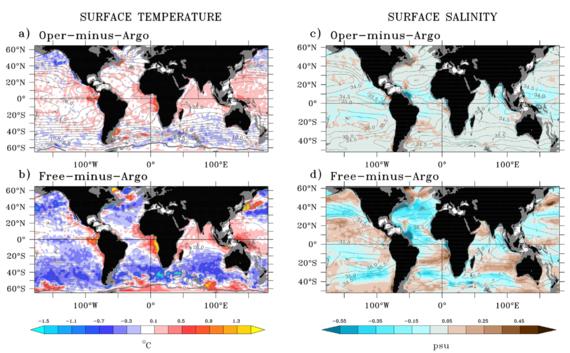 Data assimilation is fundamental for phasing processes, both in space and time. Annual variability of temperature, salinity, SH and SSH appears to be consistent with observation data sets in both PSY4 estimates. Regional patterns of Ocean heat content trends are qualitatively consistent with the Argo product, but are quantitatively stronger. The operational system needs more independent data for qualification/validation as well as dedicated metrics on processes (e.g., closing the mass/heat/freshwater balances).

Robust variability statistics on a 11-year long term period demonstrate in this study, the striking improvements due to data assimilation. It highlights also the ability of numerical modeling to reproduce large-scale variability at a global scale. The enhancement and extension of the observing networks to create an integrated observing system are carried out by combining scientific and operational needs, which should greatly benefit operational systems.