The ocean mitigates the impact of the human activities on the Earth climate as it stored more than 25% of the CO2 due to human activities and 93% of the excess of heat received by Earth due to the increase of greenhouse gases in the atmosphere and. Thanks to data recently collected by Argo profiling floats, researchers showed that this excess heat stored in the ocean contributed to warm the upper (0-2000m) global ocean by +0.8°C since 1950. Ship-based data also revealed that a significant part of this heat was stored below 2000m, but the sparsity of those dataset prevent the monitoring of the warming of the deep and abyssal layers (below 2000m).

Through mechanisms homogenizing the water column down to more than 1000m, the North Atlantic Ocean contributes to the uptake and transfer to the deep ocean of heat and anthropogenic carbon. Their redistribution southward toward the rest of the ocean depends on the deep circulation, which is still largely unknown.

In the context of climate change , estimating the deep signal of global warming as well as the deep circulation is therefore a real challenge for the future. To address this challenge, engineers from the RDT unit of Ifremer (Unité Recherche et Développements Technologiques) successfully developed an Argo profiling floats, the Deep-Arvor, (Le Reste et al., 2016), able to measure temperature, salinity and oxygen profiles down to 4000m.This development was conducted since 2011 as part of the EQUIPEX NAOS project. By greatly contributing to the Argo network extension, it also aims to improve our understanding of this deep circulation.

A recent study leaded by French oceanographers from the Laboratoire d’Océanographie Physique et Spatiale (Racape et al., 2019) shows results obtained from the RREX experiment (Reykjanes Ridge Experiment, Thierry et al., 2018c). It highlights how deep‐Arvor floats, equipped with oxygen sensors, can reveal the spreading and mixing of the Iceland‐Scotland Overflow Water (ISOW), one of the major component of the cold limb of the MOC east of Greenland. 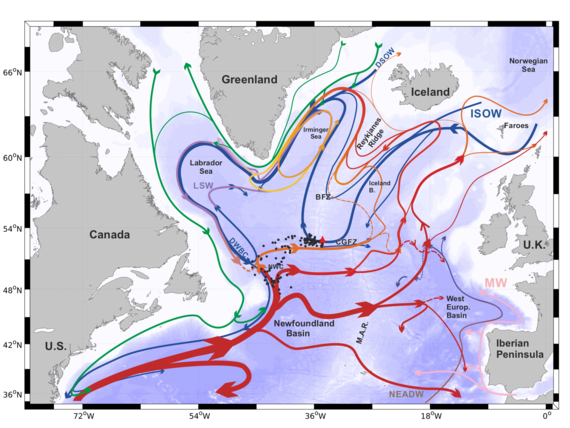 Within the North Atlantic subpolar gyre, ISOW is a young water mass, rich in O2, originating from the Nordic Seas. ISOW flows southward east of the Reykjanes Ridge in the Iceland Basin. Most of the southward flow ultimately reaches the Charlie‐Gibbs Fracture Zone (CGFZ), near 52°N, which is a real gap of 3600m-depth in the Mid‐Atlantic Ridge that constraints the pathway of deep-water masses. Along its southward pathway, ISOW interacts with North East Atlantic Deep (NEADW), an old and complex water mass coming from the eastern North Atlantic. The interaction between ISOW and NEADW within the CGFZ and their relative contributions to the deep flow has never been documented.

In this context, three Deep-Arvor floats have been deployed simultaneously in the CGFZ in summer 2015, during the RREX2015 cruise (Branellec and Thierry, 2016; Petit et al., 2018). Two additional floats were deployed at the same location in summer 2017, during the RREX2017 cruise (Branellec and Thierry, 2018). Details on their identity and programming are mentioned in table 1. Equipped with oxygen sensors, those five Argo floats freely drifted at their so-called “parking depth” 2,750 dbar, in the core of the ISOW. Every 10 days, profiles of temperature (T), salinity (S) and dissolved oxygen (O2) have been collected as function of pressure (P) between 4000m (or the bottom) and the sea surface. P, T and S were measured using a Seabird SBE41CP CTD sensor, while O2 was measured with an Aanderaa Optode (4330).

An Optimum Multi-Parameter (OMP) analysis (https://omp.geomar.de) was used also to identify water masses that explain hydrological and biogeochemical properties measured by Deep-Argo floats near their parking depths. The OMP analysis was performed for each measurement of every vertical profile of every float. This method is based on a simple model of linear mixing between predefined Source Water Types (SWTs), assuming that mixing coefficients are identical for all SWT properties. In this study, SWTs - renamed Local Water Type (LWTs)- were defined directly from four Deep-Argo dataset to investigate regional mixing, instead of mixing between SWTs from remote formation regions.

In addition, AVISO maps of satellite-derived surface velocities are used to analyze surface dynamic conditions and to track potential eddies. They have been downloaded from the CMEMS website*.

The floats trajectories (figure2 - left) revealed that the five deep floats globally moved westward during their stay in the CGFZ, in particular during the few cycles after their deployment. This overall westward displacement was perturbed between 36°W and 38°W, where some floats either moved northward, southward or recirculated eastward in the southern or northern valley of the CGFZ. Those different routes for few cycles depending on northward intrusions of the NAC over the CGFZ. One float (DP15-3) revealed a new direct route for ISOW, from the CGFZ towards the Deep Western Boundary Current (DWBC) at Flemish Cap; the DWBC being the major conduit for deep water masses to the subtropical gyre. 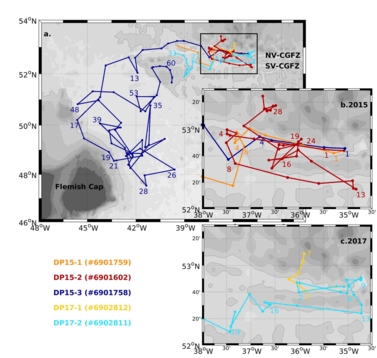 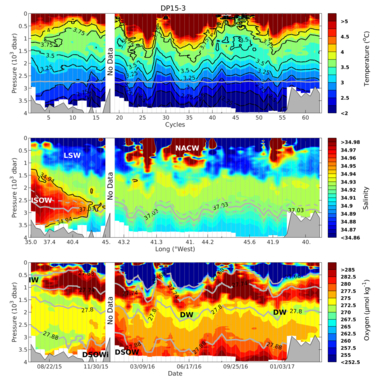 Figure 2. (left): Trajectories of the five Deep-Argo floats deployed in the Charlie-Gibbs Fracture Zone (CGFZ) in summers 2015 and 2017 – (right) : Section of potential temperature (top; in °C), salinity (middle) and dissolved oxygen concentration (bottom; in μmol kg-1) measured in the CGFZ by DP15-3. From Racape et al., 2019

From the OMP analysis, five LWTs (ISOW, IW, LSW, NEADW and DSOWi) have been defined to explain the evolution of ϑ-S and O2 properties of deep water masses measured by the five Deep-Argo floats in the CGFZ and beyond, and two additional LWTs (DW and DSOW) for the region dominated by the NAC that was only sampled by DP15-3 (figure 2 - right).

In the CGFZ, oxygen data revealed that the ISOW layer was mainly composed of the young and highly oxygenated ISOW, and the old and less oxygenated NEADW. The interaction between the NAC and the deep flow in the CGFZ favors this mixing of ISOW with NEADW. In the western basin, the ISOW-NEADW signal flowing westward from the CGFZ towards the DWBC was progressively diluted by LSW and DSOW. These results advocate for equipping Deep‐Argo floats with oxygen sensors to improve understanding of deep circulation and water mass mixing.