Recent technological advances in biogeochemical sensors for autonomous platforms provide the opportunity to observe the chemical and biological elements of marine ecosystems in a new and systematic way. Several low power sensors that can operate for multiple years are now available and already deployed on several Argo floats. Biogeochemical sensors for oxygen, nitrate, fluorescence, irradiance and others are now available and can serve as proxies for several important components of the biological ocean (e.g. chlorophyll, particulate organic carbon (POC), etc, see e.g. Dall'Olmo and Mork, 2014).

In this study, the oceanic particle size distribution is investigated using an Argo float deployed in the Norwegian Sea in January 2014, equipped with additional biogeochemical sensors (oxygen, irradiance, fluorescence and backscattering). From these observations, we can, among other, investigate the dynamics of particles in the mesopelagic zone, phytoplankton blooms, vertical carbon flux, and the seasonal evolution of oxygen in the upper layer. The study contains one year measurements of chlorophyll-a and spectral optical backscattering from the biogeochemical Argo float in the Norwegian Sea (see figure1). 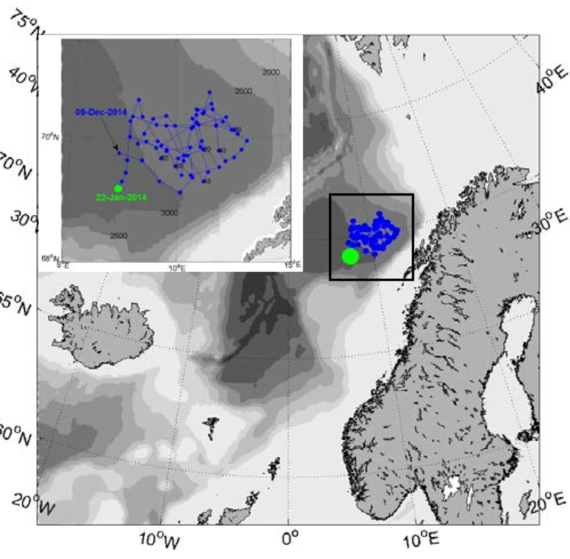 Figure 1 : Locations of the profiles from the imrbio002 Argo float in the Norwegian Sea with bathymetric map of the Nordic Seas.

The measurements detected the vernal phytoplankton bloom as well as the relative abundance of small versus large particles (i.e. the ratio of bhp(532):bbp(700), see figure 2). Small particles peaked in winter when phytoplankton were essentially absent from the water column (spectral bbp ratio is at its maximum in january-february). In March, the relative abundance of large particles started to increase within the mixed layer as the bloom started (spectral bhp ratio decreased). The abundance of large particles relative to small particles was largest in the productive layer during spring and summer when the bloom still existed, and increased also in the mesopelagic layer as the summer advanced. 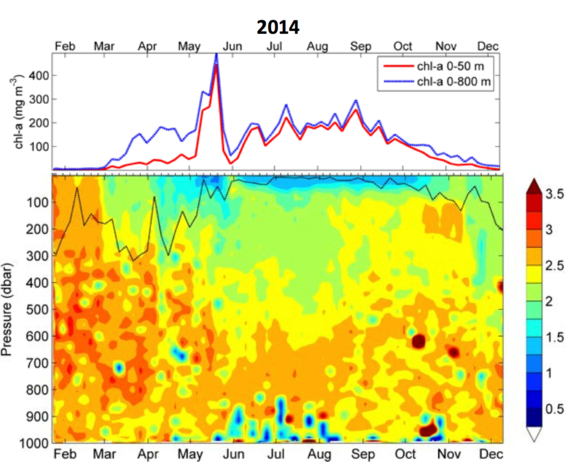 Figure 2 : a)- upper figure : vertical sum of chlorophyll-a fluorescence in the upper 50 and 800m. b)- lower figure : Ratio of green-to-red particulate backscattering (bbp532:bbp700) as a function of depth and time. The solid black line is the mixed-layer depth.

The seasonal dynamics of the particle size distribution in the Norwegian Sea can be determined by optical backscattering sensors on Argo floats. In the spring, summer and autumn, the abundance of large particles in the upper productive layer increased relative to small particles, and also in the mesopelagic layer during spring and summer. These finding support the use of autonomous platforms to detect changes in the particle size distribution and improve our understanding of the biological carbon pump.