Work is underway by the Marine Climate Change team in the Marine Institute to use time series data from the Argo array as a tool to assess changes in oceanographic conditions in the North-East Atlantic. The performance of a Northeast Atlantic Operational Model is monitored by performing routine validation against real-world measurements. Three data streams have been targeted for validation efforts (ARGO float profiles, NASA Microwave SST, and Irish tide gauge network) primarily because these streams produce measured data on an ongoing basis and the data is easily accessible. Validation allows to quickly identify problems in the model as well as increasing the understanding of the model's abilities and limitations. It also helps to fine-tune the model for optimal performance.

The Irish Marine Institute (IMI) northeast Atlantic model runs on an operational basis. Its domain encompasses a large portion of the northwest European continental shelf, and also includes the Rockall and Hatton Banks and the Rockall Trough. It runs in hindcast-forecast mode using the Regional Ocean Modelling System (ROMS), a free-surface, terrain-following, primitive equations ocean model. A 7-day hindcast is run once a week using best available forcing data. A 2.5-day forecast is run every day and the data is made available to external users via the Thredds server.

The ocean circulation model incorporates detailed bathymetry from the seabed survey. The circulation is driven by winds, heat fluxes and rainfall derived from NCEP's GFS atmospheric model. Measurements of freshwater discharge from some 40 rivers are included in the simulations. The model is embedded into a much larger scale North Atlantic model, MERCATOR, to include regional oceanic variability such as variations in the North Atlantic Current. Tidal forcing is also included.

Validation is performed against the model hindcast data and this is done once a week after the hindcast model run is complete. Float locations and profile plots (figure 2) as well as quantitative model skill metrics for each profile (bias, skewness and RMS of difference; correlation coefficient) are calculated to evaluate the performance of the model. Colour coded maps of the validation metrics are created to better highlight where the model is doing well or is need of improvement (Figure 3). 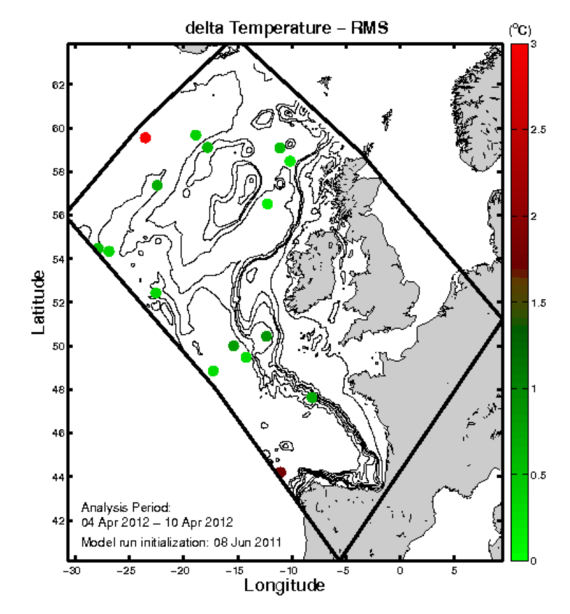 Near real-time comparison of model and Argo profiles will strengthen the case for sustained Argo funding from the ministries that rely on model outputs for decision support within Ireland. The Marine Climate Change (MCC) programme in the Marine Institute intends also to make use of Argo float data for analysis purposes. As a preliminary approach, the floats are providing valuable time series data to assess spatial and temporal variations in the mixed layer depth and Temperature-Salinity profiles in the North East Atlantic.